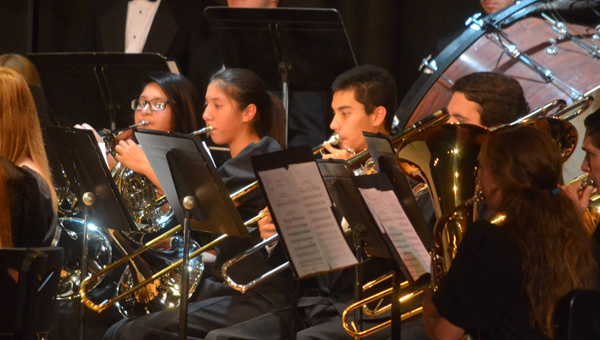 A PHS junior and trombone player in the PHS band, Aaron Wilkes was selected to the 2014-2015 All-State Gold Jazz Band. (Contributed)

Wilkes was one of 21 musicians selected to the 2014-2015 All-State Gold Jazz Band, a collection of the best high school musicians across the state.

Students must apply by submitting a recording, including a technical piece, a “more lyrical piece that’s more like a ballad,” an “audition etude,” and a set of eight scales, Wilkes explained. Wilkes spent nearly five hours after school completing the recording to send to the judges.

Wilkes first applied for the All-State Jazz Band as a sophomore and did not get selected. This year, he decided he would give it another shot.

“Coming around this year, I thought ‘Ok, it couldn’t hurt to try again,’” Wilkes said.

The news of his selection to the All-State Gold Jazz Band this year was broken to him by his history teacher after class.

“I was in my history class, and my teacher said ‘Congrats!’” Wilkes said with a laugh, explaining he assumed she was referring to a recent test score. “I had no idea what she was talking about.”

Making it to the All-State Gold Jazz Band has been one of Wilkes’ goals as a musician, and his selection has inspired him to keep pushing for more.

“This was a goal (of mine). I’ve always wanted to get that goal of being at the top,” Wilkes said. “It says nothing is impossible, it doesn’t stop here.”

The selection to the prestigious group of musicians was only part of the challenge, Wilkes said, a lot of practice leading up to the performance with the group still lies ahead.

“These are supposed to be the best jazz players in high school,” Wilkes said. “That’s a lot to live up to.”

Playing with the PHS Jazz Band has “definitely” prepared him for the challenge, Wilkes said.

“(Director of Bands Justin Ward) has allowed us to expand our skills. He’s given us a wide range of music to play, ” Wilkes said, adding the band also gives him a supportive community of friends. “Band is a family, it really is. We’re one big, happy family.”

No one injured in school bus wreck on U.S.…