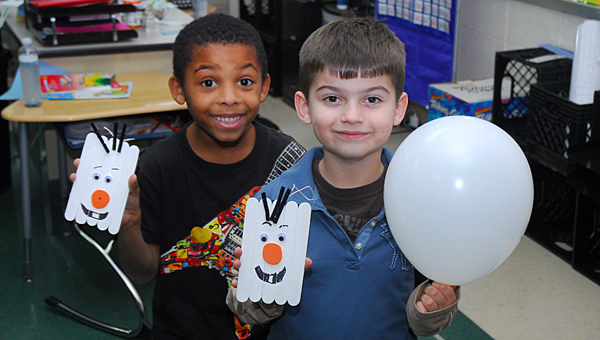 ALABASTER – Whenever things became trying in Alabaster’s Warrior Center over the past few weeks, teacher Candice Chenault just reminded her students how many days they had until “Frozen” day.

And for the special-needs students at the Warrior Center, the day did not disappoint.

From noon-2 p.m. on Dec. 18, the Warrior Center students had fun participating in the Christmas party, which was modeled after the popular movie “Frozen.” During the event, the kids created Olaf the snowman ornaments, played a beanbag toss, pinned the nose on Olaf and even had their pictures taken in a photo booth. The kids even made a clear bottle of sparkly water intended to mimic “Olaf in a snowstorm,” Chenault said.

Warrior Center students Jordan Lacey and Preston Strickland were eager to show off their creations and demonstrate how they were made.

“The food,” Lacey said when asked about his favorite part of the event as he enjoyed a piece of cake.

“I liked the pictures in the photo booth,” Strickland added with a smile.

The event came as an initiative of a group of Thompson Middle School and Thompson High School students. Will Vickers, a TMS student who helped to organize the party, said picking a theme wasn’t hard once they spoke to the Warrior Center students.

“We found out that they didn’t just like the movie ‘Frozen,’ they loved it,” Vickers said. “We spent about three weeks organizing this. We just kind of looked at ideas that other people had, and tweaked them a little bit.”