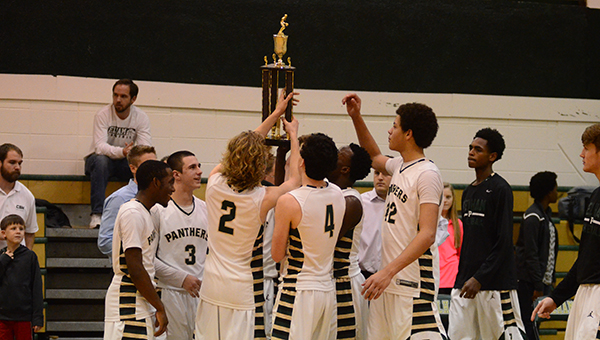 PELHAM–Playing on their home floor, Pelham took on a familiar opponent on Saturday, Dec. 20 in the championship game of the Shelby County Tournament.

The Panthers defeated the Thompson Warriors 60-55 to win the Shelby County Tournament Championship. It was the second time Pelham has beaten Thompson this season.

“It was a great tournament for us going into the break,” Pelham head coach Joel Floyd said after the game. “Playing teams that we all know each other because we play each other in the regular season makes it a lot more difficult. That was the third time we’ve played Oak Mountain and the second time we’ve played Thompson so it’s hard to win those kind of games and I’m proud of the guys for their effort today.”

Thompson had control for much of the first half as they took a 24-22 lead heading into halftime, before Pelham came out with a big third quarter.

Alex Reese led Pelham in scoring, with all 14 of his points coming in the second half.

A turning point in the game came in the third quarter when Pelham’s Zach Allison and Moregan Sharp drove the lane on back to back possessions and made lay ups while getting fouled, then both made their free throws.

Pelham lead 40-35 at the end of the third quarter and never looked back.

“We had one guy out today and we got foul trouble on two more guys in the first half so we were learning how to play through adversity today,” said Floyd. “We did a terrific job in the second half of stepping up and executing when it needed to be done and making plays when you had to win the ballgame.”