ALABASTER – A 34-year-old Florida woman is facing 11 felony charges after she allegedly broke into a vehicle in 2012 and then stole a second victim’s bank account information. 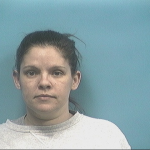 The Alabaster Police Department arrested Amy Mae Luongo, who lists an address in the 6500 block of Southwest 11th Street in Pembroke Pines, Fla., on Dec. 17 and charged her with two counts of illegally breaking and entering a vehicle, two counts of second-degree theft of property, one count of first-degree identity theft and six counts of fraudulent use of a credit or debit card.

The charges came as the result of a June 24, 2012, incident during which Luongo allegedly broke into a 2007 Infiniti and stole a purse, U.S. currency, a cell phone, a wallet, a check book, an Alabama driver’s license, a Social Security card, car keys and five credit cards.

Luongo’s fraudulent use of a credit card charges came after she allegedly attempted to use the credit cards stolen in the car break-in, according to her arrest warrants.

She pleaded guilty to all of her Montgomery County charges – except for the conspiracy to break and enter a vehicle charge – on Nov. 12, and received a sentence of two years on probation.

All of her Shelby County charges are Class C felonies. If convicted of the crimes, she could face up to 10 years in prison per charge.

As of Dec. 23, Luongo was being held in the Shelby County Jail on bonds totaling $175,000, and was scheduled to appear in court for an arraignment on Feb. 3.