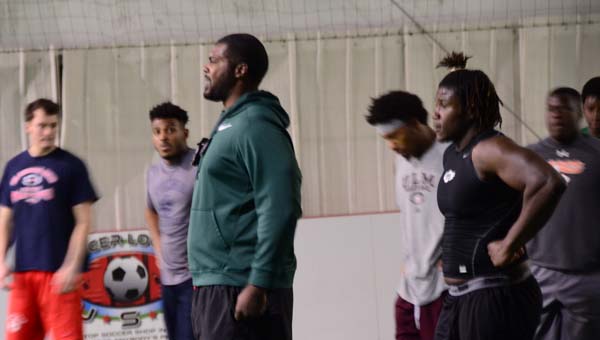 North Shelby- Otis Leverette is a big man. Standing an easy 6-foot-5-inches tall, with a booming voice and an imposing frame, Leverette has all the markers of an ex-ball player. A graduate of UAB, and a sixth round selection by the Miami Dolphins in the 2001 draft, Leverette spent six years playing defensive line in the NFL before ending his playing career in 2007. But it is what Leverette has been able to accomplish since his playing days that he is most excited about.

“When you’re a college athlete, and the time comes for you to hang up the cleats, you realize you really don’t have a resume,” Leverette said. “You’ve spent all this time playing football or basketball or whatever, while all these other kids have been doing internships.”

Because of this realization, Leverette returned to the game he loved, but from a different angle, as a coach.

“In the offseason when I was playing with the Dolphins, I would come here and work with kids, just because I liked doing it, so that’s kind of what gave me the idea to start doing what I’m doing now after I got done playing.”

Leverette runs a clinic for aspiring collegiate and professional football players out of Sports Blast Shelby County on U.S. 280. In the first year of his program, in 2008, he had two of the future biggest names in college football in Nebraska running back Ameer Abdullah and Florida State quarterback Jameis Winston.

“Those are definitely the biggest names I’ve had come through. Jameis just has some gifts you can’t teach, man,” said Leverette. “His intangibles are incredible. And Ameer, he rose from the ashes, man. When I met him he was 5-foot-5-inches tall and weighed like 140 pounds. But those kids have so much heart.”

That is what Leverette believes it takes for players in today’s game to make it to the college level or the pro level.

“Athleticism is overrated. Kid’s today are different,” opines Leverette. “A kid’s got to be willing to push all his chips out on the table and say to himself, ‘If I go down, I go down, but I know I did everything I could.’ I’ve got to get them to that level of total commitment.”

Information for getting involved with Sports Blast Shelby County can be found online at Sportsblastsc.com.