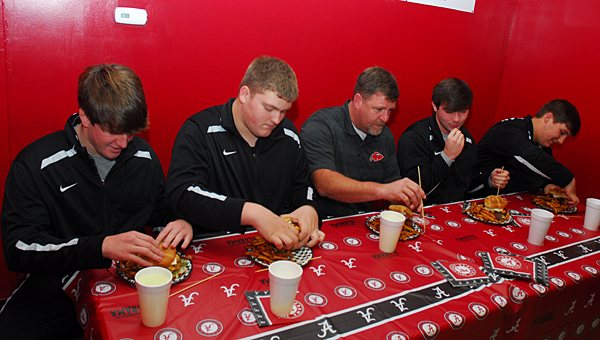 ALABASTER – While the outcome of the Jan. 1 Sugar Bowl game between the Alabama Crimson Tide and the Ohio State Buckeyes wasn’t what many local fans wanted, there were no losers in a friendly bet between Chubb’s Grub Station and a popular burger joint in Ohio.

O’Donold’s Irish Pub in Youngstown, Ohio, issued a “burger vs. burger sell-off” challenge to Chubb’s on Dec. 28 to pit the two college football fan bases’ loyalties on the day of the Sugar Bowl between Alabama and Ohio State.

Throughout the day on Jan. 1, Chubb’s sold its Sugar Bowl Bama burger and O’Donold’s sold the Buckeye burger as each restaurant worked to raise money for charity.

The Bama burger was a twist on Chubb’s “Juicy Lucy” burger, and featured grilled pineapples, homemade sloppy Joe sauce, cheese, bacon, fried jalapenos and a side of fries.

Chubb’s owner Will Cholewinski tested out his burger creation the day before the Sugar Bowl by inviting Thompson High School Principal Chris Tangle and several THS varsity football players to lunch at the restaurant. During the taste-test, Tangle and the football players gave the culinary creation a glowing review after they raced to wolf down the burger.

Cholewinski said the Chubb’s restaurants in Alabaster and Chelsea sold more than $2,000 worth of the Bama burgers on New Year’s Day, and said he is preparing to send a check for about $200 to Second Harvest in Ohio.

But even though Alabama lost the football game, Alabaster’s charities will still be able to reap the benefit of the restaurants’ bet.

With the help of the burger sell-off and donations gathered at Chris and Tracy Richardson’s Christmas light display off Arrow Drive, Chubb’s collected “several hundred pounds” of non-perishable food items to donate to Alabaster charities.

“We have had another fantastic week of donations,” Cholewinski said on Jan. 2. “I mean, we’ve got boxes of food sitting in here that I can’t even move.”

BY JON HARRISON/Staff Writer MONTEVALLO- The city of Montevallo is continuing research on a possible hotel in the downtown area.... read more