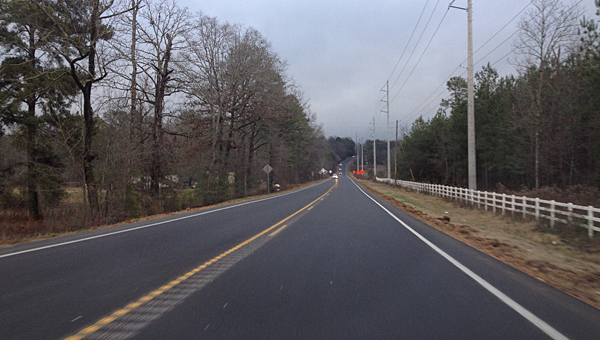 ALABASTER – Crews with the Dunn Construction Company are planning to lay the final striping on Shelby County 26 over the next couple weeks, marking the end of a monthlong project to repave the road.

Dunn began repaving the road, which serves as a primary route between U.S. 31 in Alabaster and Alabama 70 in Columbiana, on Nov. 19, 2014, and paved each day through Christmas. During the repaving, crews closed portions of the two-lane road and were forced to pinch traffic down to a single lane while paving was under way.

Shelby County Highway Department civic engineer Cody Long said weather did not cause significant delays in the project, allowing Dunn to complete the bulk of the repaving by the end of December.

The road now features all-new asphalt from Columbiana to Alabaster, and is the first road in Shelby County to feature a center line rumble strip, Long said.

If drivers begin to veer too close to the center line, the rumble strip will provide drivers a jarring reminder to stay in their lane.

“I’m not sure about other roads outside Shelby County, but it’s the first Shelby County road to have that,” Long said of the center line rumble strip. “It’s a safety enhancement.”

Long said he’s heard many compliments on the repaving, particularly from those who live along Shelby County 26.

“Some people who live along the road said it’s a lot quieter when cars are driving on it now,” Long said.