How does the recent rain measure up with last year? 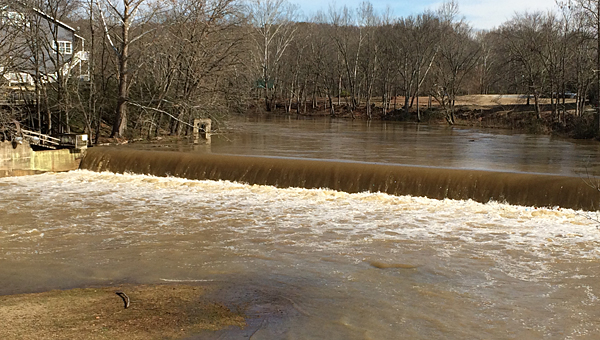 Heavy rainfalls during the first weekend of 2015 caused waters to rise significantly on Buck Creek in Helena. (Reporter Photo/Daniel Holmes)

In late December 2014 into the first days of 2015 for Shelby County residents, it felt like the rain was just never going to stop. The clouds loomed for days and the air was in a constant state of lukewarm humidity.

However, the rainiest day in Shelby County for the year 2014 was seen in December. From Dec. 27 to 28, Shelby County saw anywhere from 3 to 6 inches of rain.

John DeBlock, the warning coordination meteorologist for the National Weather Service’s office in Calera, said weather is “all about perception.”

“If there is a severe thunderstorm in an area that dumps 2 inches of rain in your yard but your friend across town got nothing, your perception of how much rain that your particular city or county got is going to be skewed,” said DeBlock

With places such as Pelham, Helena and Alabaster having some flooding issues in the last few weeks, Deblock said he understands how local residents feel as if December was a record rainfall month.

“Unless you actually are measuring rain with a rain gauge, there is really no way to know if the rain is above or below average,” said DeBlock.

The December 2014 rains flooded numerous places in Shelby county. Buck Creek in Helena flooded, carrying playground equipment downstream. In Pelham, the residents at Chandalar Court experienced flooding in their homes and up to 2 feet of water in their parking lot, blocking residents either in or out of their homes. The city of Pelham is looking into ways to address the flooding issues in this part of the city, council members said during a Jan. 5 meeting.

Alabaster man asks for exile rather than prison sentence