Helena takes down Calera, improves to 3-1 in area play 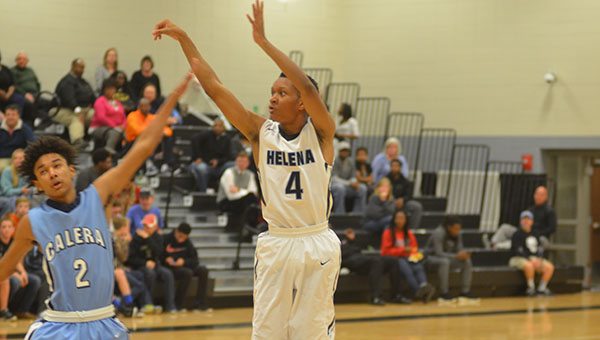 HELENA–Stifling defense paired with 18 points from freshman Justin Stuckey was enough to give the Helena Huskies a decisive 52-24 win over the visiting Calera Eagles on Friday, Jan. 9.

Helena never trailed in the game as they led 13-7 at the end of the first quarter and held Calera to just 8 total points in the second half to secure the victory.

“To hold them to 8 points in the second half that’s pretty incredible because they’ve got some athletes, some good scorers, good shooters, size inside so I’m really proud of our kids for that defensive effort,” said Helena Head Coach Chris Laatsch on his team’s defense after the game.

Helena had all the momentum going into halftime as Stuckey buried a long three pointer in the corner as time expired, giving Helena a 29-16 halftime lead.

Being just a freshman, Stuckey has started the past few games and continues to impress his head coach.

“He’s a starter for us and he just competes and he loves to play,” Laatsch said about Stuckey. “He’s got the ball everyday in practice, every game and he just works. He’s done a really good job and he just makes big plays.”

In the program’s first year in existence, Helena continues to improve and wants to build on success as they moved to 11-9 on the season.

“Being a first year program, we’ve got everything in and now were trying to fine tune,” said Laatsch.

Helena will host Shelby County High School Tuesday, Jan. 13 where they will surely be tested. SCHS is currently ranked #6 in the Class 5A ASWA rankings.