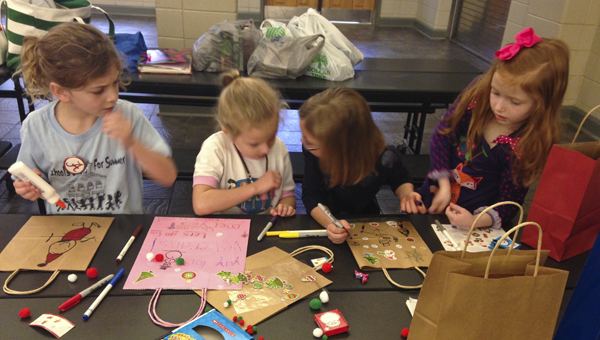 CHELSEA – The generosity of a local Girl Scout troop reached more than 40 veterans recently, providing them with gifts to open this Christmas.

All 13 members of Daisy Girl Scout Troop No. 600 participated in a community service project in December to collect, assemble and deliver gift bags to veterans through Three Hots and a Cot, an organization that provides shelter and assistance to homeless veterans in the Birmingham area.

Troop No. 600 co-leader Kari Whitaker said the idea for helping Three Hots and a Cot was among several options she presented to the members, who are first-graders in the Chelsea area, for their first community outreach project.

“I was just so thrilled with how excited the girls were,” Whitaker said. “For some reason, they really stuck on this one to help the homeless veterans. I think a lot of them have family members serving in the military. They identified with it somehow.”

“All principals were very helpful,” Whitaker said. “They were eager to put the flyer up on the listservs for schools.”

The troop also created a promotional video, made posters to hang up and decorated the gift bags.

The troop delivered gift bags to 43 residents at Three Hots and a Cot transitional centers in Birmingham, along with extra items geared toward female residents the centers could have in the future.

“They were so thrilled,” Whitaker said of the residents. “It brought a smile to their faces. They were all really touched and genuinely appreciative.”

Donations may still be made at Cotsforvets.org.

“You can contribute monetarily or you can contact the director for specific needs,” Whitaker said. “Everybody was so helpful and supportive. We might do this (project) again.”