Thompson girls get ‘big, big win’ as they upset #2 Hoover 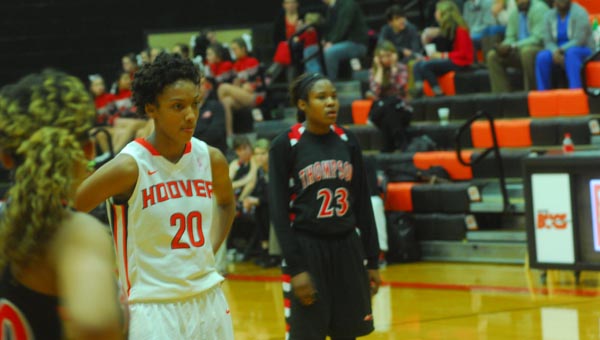 Jailyn Maddox of Hoover gathers herself before shooting a free throw while Thompson’s Janese Richardson looks on. Thompson was able to pull out a 50-47 win at Hoover. (Reporter Photo / Baker Ellis)

HOOVER- In what turned out to be an instant classic at Hoover High School Tuesday night, the Thompson Lady Warriors were able to come to the Lady Buccaneers’ home court and squeeze out a 50-47 victory behind scathingly hot early shooting, offensive rebounding, and free throws down the stretch.

Hoover opened the game up with a quick two from Kendra Langham, before Thompson absolutely caught fire from deep, hitting six of their first seven three-point shot attempts in the first quarter.

“We were unconscious early,” Thompson coach Josh Golden said after the game. “We can really shoot, but no one shoots like that for very long.”

Azariah Jackson and Myesa Pelton were responsible for the teams’ hot streak early, both hitting three triples. The score was 23-9 in favor of Thompson after one.

However, as Coach Golden emphasized, no one can stay that hot that long. Thompson began to come back down to Earth in the second, and the game began to turn in favor of Hoover.

“Hoover is a traditional powerhouse in the state,” said Golden. “Anyone who follows girl’s basketball in this state knows you’ve got to come through them.”

The Thompson offense stalled in the second quarter with Pelton and floor general Janese Richardson on the sidelines, and Hoover was able to ride a 12-6 run that encompassed the whole second quarter to trail 21-29 at the break, well within striking distance.

As the game wore on into the third and fourth quarters, it was obvious to tell these were two of the premiere girls’ programs in the state trading blows, trying to land a knockout punch. Thompson thought they had found it when, up 40-37, Indiah Cohill nailed a three to put her team up 43-37 in the fourth. Hoover would immediately respond with a three of their own to bring the game back to a one-possession affair.

Both teams traded free throws back and forth, and with the score standing at 48-46 in favor of Hoover after two Cohill free throws, Thompson began to press and drew a five second call on the following inbounds play. Free throws would ice the game for the Lady Warriors. Cohill scored eight of the final 10 points for Thompson to ice the game.

“This is a huge win. A big, big win for our program. It’s one of the biggest wins in our programs’ history,” Golden exclaimed after the game.

Thompson, ranked ninth in 7A before tonight’s’ contest, moves to 20-4 on the season.

Hoover is currently the number two-ranked team in 7A