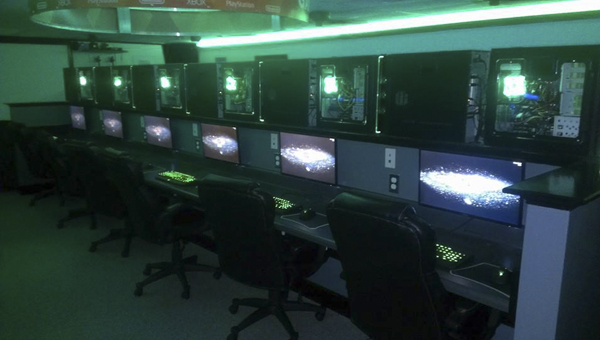 Press Start, a gaming cafe in Alabaster, has become a popular hangout in Alabaster, offering 50 stations, 100 consoles and thousands of video games. (Photo by Ginny Cooper McCarley/Special to the Reporter)

ALABASTER – For Dennis Torrealba, owner of Press Start, a gaming cafe in Alabaster, video games are a way to momentarily escape reality.

“(You can) forget about what’s going on in the real world and focus on something else for a little while,” Torrealba said.

Press Start, which opened almost one year ago, is a popular new hangout in Alabaster. With gaming systems dating back to 1973, Press Start has something to appeal to customers of all ages.

“We have guys who come in for nostalgia,” Torrealba said, noting many dads will play the older games while their children play on the new systems.

The gaming cafe has patrons from “10 to 65 years old,” Torrealba said. “We have bankers that come in ties at lunch and play.”

With 50 stations, 100 consoles and thousands of games, the options are endless. In the upcoming year, Torreabla plans to add dozens of extra stations to keep up with demand. In addition, he will take a team of kids from Shelby County to New Orleans to compete against another gaming cafe in person.

“It’ll give us a reason to go get some food,” joked Torrealba, who hails from New Orleans originally and moved to Alabaster with his wife, Adrienne, after losing everything to Hurricane Katrina in 2005.

The cafe is not just for those who are interested in video games. Torrealba said people will bring in a book and coffee and just relax. Often, men will watch football while their boys play games.

For Torrealba, the best part of the business is seeing the amazement of first-time visitors and watching kids socialize and talk as they play games.

“I get a big kick when people come in for the first time and say, ‘I can’t believe this is in Alabaster,'” Torrealba said.

Columbiana city officals and members of the Shelby County commission gathered for the groundbreaking of the new senior center on... read more