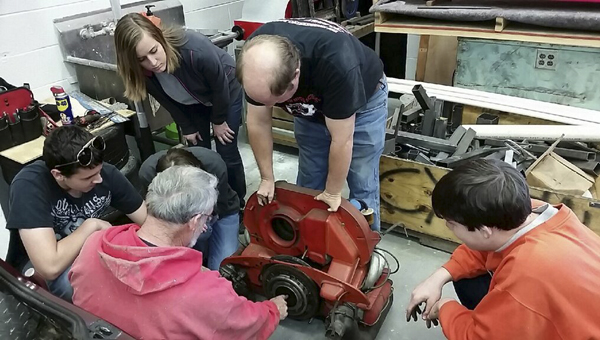 A group of Thompson High School students, their teacher, Brian Copes, and retired master electrician Miles Jackson, are working to convert a 1974 Bradley into an electric car. (Photo by Ginny Cooper McCarley/Special to the Reporter)

ALABASTER – Six Thompson High School students are working for the next four Saturdays to turn a gas guzzling 1974 Bradley into an electric car under the instruction of their teacher, Brian Copes, and retired master electrician Miles Jackson.

Jackson rebuilt a 1974 Voltswagon bug, which costs just $0.03 per mile to operate, Copes said, and is now mentoring a group of students who expressed interest in the project.

“It’s just a way to excite a new generation about the benefit of electric cars versus their gas guzzling predecessors,” Copes said, noting that a group of students are also working to rebuild a 2004 Dodge Neon hybrid.

Once finished, the electric car will be used primarily as a local driving car and a research tool for the students.

Alabama Power and Zero RPM, a custom lithium battery manufacturer, are partnering on the project, providing resources and helping with technical expertise.

Rick Shelton, a local author, will also be visiting the school to critique the students’ technical writing.

In addition, a group of THS students will be be participating in the Electrathon, an electric car race hosted at Barber Motorsports Park in Leeds. Twenty teams from across the state, with groups coming from Florida and Georgia as well, are given kits to make electric cars.

“We’re applying that technology to a full-sized car,” Copes explained. “We’re excited about it.”

Hoover BOE declares intent to contract with AASB in…