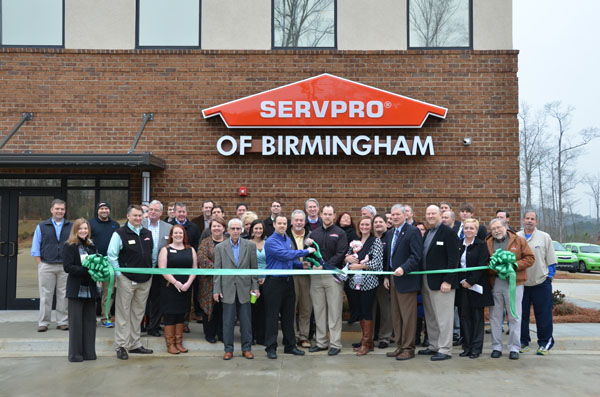 Servpro of Birmingham opened the doors to their new facility in Pelham at a grand opening ceremony on Jan. 15. (Reporter Photo/ Jon Harrison)

Servpro of Birmingham was originally in the Pelham Industrial Park.

“We just moved this facility because we actually ran out of room for parking and employees,” said David Wilson, an owner at the new location. “We have grown so much, we’re blessed that we needed more space.”

Wilson is a long-time Servpro franchise owner, and has made the business a family affair.

“I have owned a Servpro franchise for 30 years, so it’s been a long time coming,” said Wilson. “My two sons, Benji and Brady, are partners in the business and this is perfect timing for us.”

The new location is located on 2000 Huntley Parkway in Pelham.

“We are not even .2 miles from our previous location in the industrial park,” said Wilson. “We were fortunate enough to find this property right where we needed it.”

The Servpro of Birmingham also plays a large role with cleanup throughout the Southeast.

“We not only serve Jefferson and Shelby County but we also serve the agency adjusters, the insurance community as well as the commercial community,” said Wilson. ‘We are also the large loss team for Servpro corporate nationally. Our team covers, administrates and coordinates all the teams in the southeast when there is any kind of disaster.”

Wilson also said that he and his partners wanted to keep the business in Pelham.

“We are really excited to have this in Shelby County and here in Pelham,” said Wilson. “We want to open this up for use to the community and that is what we are displaying today.”

Servpro is also leasing some of its new office space to a local program organization called Vineyard Family Services. This organization provides a service called “Backpack Buddies” in local schools that provides children who struggle with hunger, food to eat in the afternoons and on weekends.

“Vineyard Family Services is currently leasing some of our new office and storage space so they can serve the community,” said Benji Wilson. “We are glad to be partnered with a good cause in Shelby County.”