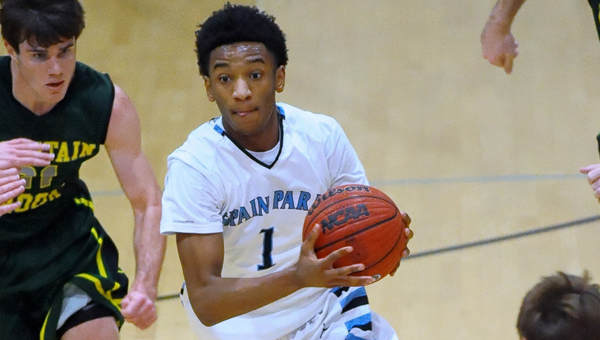 Jamal Johnson of Spain Park gets into the lane against Mountain Brook on Jan. 20. (Contributed / Ted Melton at actionsportspix.smugmug.com)

HOOVER- High school basketball doesn’t get much bigger than this in January. The two-time defending 6A State Champions and current 7A top dog Mountain Brook came into Spain Park on Jan. 20 for their second meeting of the season. The Spartans were hoping to repeat the outcome of their first meeting, where they came away with a convincing 20-point victory over the Jaguars. However Spain Park came out and played with intensity, intelligence, and added length.

6-foot-9-inches worth of added length, to be precise.

Austin Wiley, Spain Park’s imposing sophomore center, was out sick for the first contest between the two teams, and his presence on the floor on this night drastically impacted the outcome of the game.

The top-ranked Spartans came out of the gate pressing, and did not relent on their full-court press attack at any point throughout the evening. Early in the contest, Mountain Brook was able to create opportunities for easy buckets off of turnovers forced in the backcourt because of their press. The Spartans used a nine-man rotation for the game, and were substituting often to keep fresh legs on the floor to continue their full-court attack.

In the second quarter, Jamal Johnson of Spain Park began to show flashes of why he is considered to be one of the top guard prospects in the state in the class of 2017. The Spartans cooled off from deep, and they were not able to set up the kind of full-court press off of the missed shots, giving the sophomore Johnson room to operate in the open floor, which he did with ease, scoring four points in the second quarter and assisting on several buckets as well. Mountain Brook managed only nine second quarter points to Spain Park’s seventeen, and the Jaguars went into the half up 33-25.

“Basketball is a game of momentum and runs,” Spain Park head coach Neal Barker said after the game. “We were able to get stops in the second quarter and get out in transition. We killed the momentum they had and created some of our own.”

Moving into the third quarter, the home crowd could sense this was a special night, and began to make their presence known. Mountain Brook however came out in the third quarter and began to play like the top-ranked team in the state. Jack Kline, who kept the Spartans alive for most of the night, connected from deep to start the second half before back-to-back dunks courtesy of Wiley and Johnson brought the crowd to a new level of frenzy.

The Spartans were not done, however, and when facing a 42-36 deficit, began to once again cause problems with their press, creating easy buckets en route to a 5-0 run. Two free throws from Wiley at the end of the third brought the score to 44-41 after three quarters of play.

The Spartans were never able to get closer than three points the rest of the way. Wiley’s size in the middle altered the vast majority of Mountain Brooks’ shots throughout the night, but he was especially active in the fourth quarter. He and Johnson would combine to go 9 of 10 from the free throw line in the fourth quarter to ice the game for the Jaguars.

Johnson and Wiley were the only two players to crack the scoring column for Spain Park in the entire second half, although big defensive efforts from Smiley and Malik Blanchard also contributed to the victory. Spain Park rarely substituted any of these four players out, only giving them brief periods of rest, as all four were integral to the success on this night.

Kline led the Spartans with 16 points, and was the only Mountain Brook player to have any interior offensive success against the Jaguars.

Johnson had 16 and Wiley contributed a game-high 22 points for Spain Park.

“This was just a fun atmosphere,” Barker said after the game. “Both of these teams played very well, and we’re very happy to have come out on top.”

Spain Park moves to 21-3 overall, while Mountain Brook moves to 19-5. Both teams are currently tied for the 7A area 6 lead.

Claire Holt of Spain Park goes up for a basket during Spain Park’s 61-52 win over Mountain Brook. (Contributed /... read more