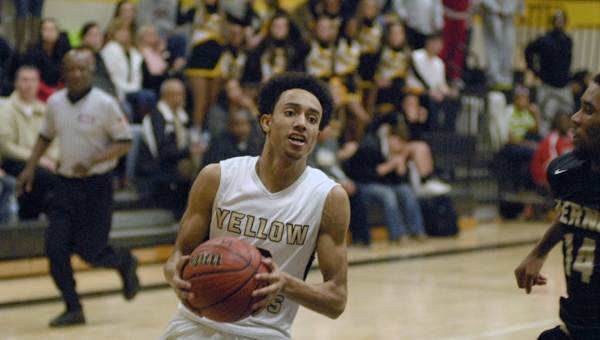 Jace Greene and the Vincent Yellow Jackets fell by two at Shelby County on Jan. 20. (File)

COLUMBIANA- In a hard-fought contest on Jan. 20, the Vincent Yellow Jackets came up just short of defeating one of the top 5A teams in the state in Shelby County on their home floor. Shelby County, currently the 5A eighth ranked team in the state, was able to hold on late against Vincent to further their impressive campaign.

“I thought we competed really hard,” Vincent head coach John Hadder explained. “We competed in a fashion that gave us a chance to win the game.”

Vincent took a 32-27 lead into the break behind strong play from seniors Jacorey Roper and Vec Hamilton. The Yellow Jackets, who are currently the top-ranked 2A team in the state, were in a good position going into the half to secure the win.

In the second half, however, the home team was able to put some distance between themselves and Vincent courtesy of a 16-8 run that encompassed the entire third quarter, and gave the Wildcats a 43-40 difference that would prove to be insurmountable in the last quarter of play, as Shelby County was able to hang on to win by two, 58-56.

“They’re a good basketball team,” Hadder said. “You’ve got to give them credit for playing well down the stretch. We didn’t finish in the last two minutes of the game like we needed to against a good team.”

Vincent will face Thorsby tonight before closing out their regular season next week.

Najar Williams, shown here in 2012, and the Yellow Jackets were able to pick up a win at Sylacauga on... read more