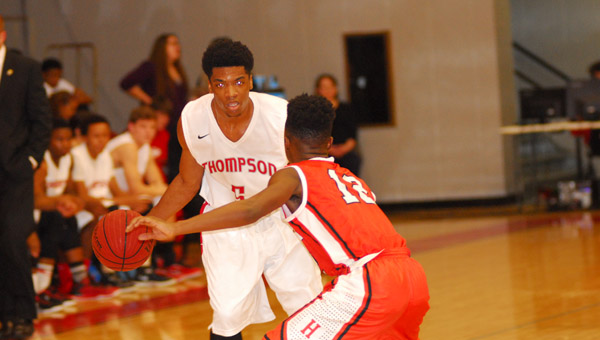 Thompson’s Rashad Strother sets up to go around Matt Calhoun of Hoover in Hoover’s 60-42 win at Thompson on Jan. 23. (Reporter Photo / Baker Ellis)

ALABASTER- On a Friday night contest that saw some offensive fireworks early and often, the Hoover Bucs were able to get out of the Thompson Warriors home gym with a win behind the efforts of Dylan Smith and Austin Cherry.

Hoover came out of the gate absolutely on fire, connecting on their first four triples to take an early 12-4 lead in the first. Thompson responded with an 8-0 run, and both teams settled in to what would turn out to be an entertaining game.

After Thompson leveled the score behind threes from Rashad Strother and Demonte Caffey, Hoover was able to regain their lead behind some Leonard Wood free throws and a triple courtesy of Matthew Rickman. The Bucs took an 18-15 lead into the second quarter.

The second quarter did not go the way of the Warriors, as Hoover was able to hold Thompson to just six total points. Thompson couldn’t seem to connect on offense save for a Strother three, some free throws, and a bucket from Mat Huls. Smith and Cherry continued to connect from deep, and six bench points from Andrew Strickland help stretch the Bucs lead. A Maurice Brown three at the buzzer gave Hoover a halftime lead of 35-21.

The Warriors opened the third quarter on a much more aggressive note, pulling the game back to a single-digit deficit of 30-37. The problem for the Warriors was Smith, who continued his incendiary pace into the third with a few more threes. The Warriors and the Bucs traded buckets down the stretch of the third, and Thompson trailed 49-38 going into the last quarter of play.

The fourth quarter started with an 11-0 run by the Bucs and Thompson could not dig itself out of that hole. After taking a 60-38 lead, Hoover would go on to wrap it up by a final score of 60-42. Smith led the way for the Bucs with 14, and Strother led the way for the Warriors with 11.

Janese Richardson of Thompson tries to get around Hoover’s Aaliyah Bell on Jan. 23 during Thompson’s 58-48 loss. (Reporter Photo... read more