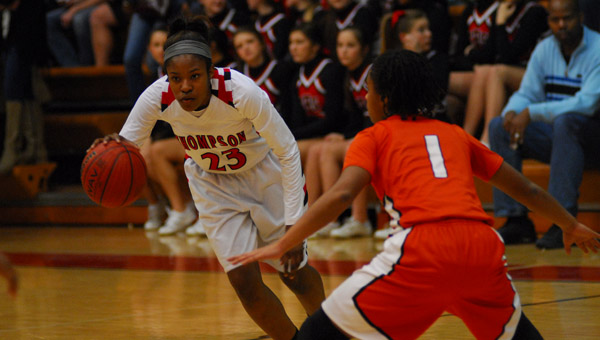 Janese Richardson of Thompson tries to get around Hoover’s Aaliyah Bell on Jan. 23 during Thompson’s 58-48 loss. (Reporter Photo / Baker Ellis)

ALABASTER- In a hard fought game that saw both teams make big runs at different points in the night, the Lady Bucs of Hoover were able to push past the Thompson Lady Warriors in the fourth quarter to secure a 58-48 win.

Hoover came out of the gate pressing Thompson, who handled the press with varying degrees of success early.  The first quarter was relatively low scoring, and was highlighted by five points from Kelsea Bivins of Thompson on the way to a 9-10 Hoover advantage after one quarter of play.

The second quarter saw both offenses settle in, and more buckets were a result. As was the case the last time these two teams met, they are both capable of scoring points in a hurry, and Thompson showed that ability in the middle of the second quarter courtesy of a 10-2 run. Janese Richardson and India Cohill regularly cut through the Lady Buc’s zone defense, and it was only due to some sharpshooting from Jada Smith and Jailyn Maddox of Hoover that kept the second quarter from turning into a rout. The Lady Warriors led 32-24 at the break.

Hoover came out firing in the third and used a 12-4 run to climb back and tie the game. A Richardson bucket gave the Lady Warriors a two-point advantage they would take into the fourth, up 38-36.

The fourth quarter was all Hoover. With the Lady Bucs down 45-40 with about 6 minutes left in the game, Hoover ripped off a 12-0 run that Thompson could not come back from. The defense of Hoover began to suffocate the Lady Warrior’s offensive endeavors, and they missed some shots around the basket. Hoover would go on to ice the game down the stretch and win by a score of 58-48.

Maddox and Smith led the way for Hoover all night, finishing with 16 and 14 respectively.

Richardson led the way for Thompson with 14.