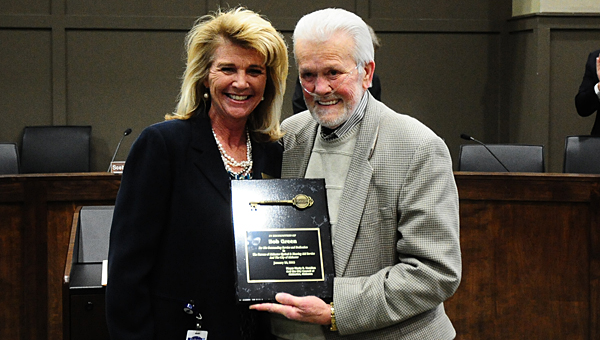 ALABASTER – When local optician Bob Green walked into Alabaster City Hall on the night of Jan. 26, he was ready to plead a case against paying taxes he didn’t even know he owed. So he was admittedly surprised to see most of his family sitting in the audience when he walked in.

“I had no idea this was going to happen,” Green said, taking a break from hugging dozens of friends and family members after the City Council meeting. “It’s like a birthday party.”

Alabaster Mayor Marty Handlon surprised Green, who owns Bob Green’s Alabaster Optical on U.S. 31 – with a key to the city and a proclamation honoring his longtime involvement in the community during the meeting.

In order to keep the presentation a surprise, Columbiana Mayor Stancil Handley – Green’s longtime friend – told Green the two of them were going to the council meeting to discuss back taxes Green owed to the city.

Green said he was prepared to plead his case before the council, but admitted something seemed suspicious.

“I owe Stancil for this one, that’s for sure,” Green said with a laugh after the meeting.

Green has owned his Alabaster business for the past 38 years, and is well-known in the community.

Over the past several years, 65-year-old Green has survived multiple near-death experiences, including a potentially fatal heart attack the week before Thanksgiving.

Over the years, Green has had two open-heart surgeries, numerous heart attacks, fluid buildup on his brain, 18 heart stints, neck surgery, a four-wheeler wreck and a car wreck. Today, Green uses an oxygen machine at all times, but still makes appearances at his Alabaster business nearly every morning.

While reading the proclamation, Handlon said Green has inspired civic leadership to generations of Alabaster’s children, and has “brought honor to his family, friends and this city.”

City Council member Sophie Martin said the turnout at the meeting “spoke volumes” about Green’s adoration in the community, and President Scott Brakefield said Green is “probably one of the best guys (he’s) ever met.”

“I can’t count how many ball teams he has sponsored,” Brakefield said. “Having him here tonight was awesome.”