Bell named 7A Coach of the Year 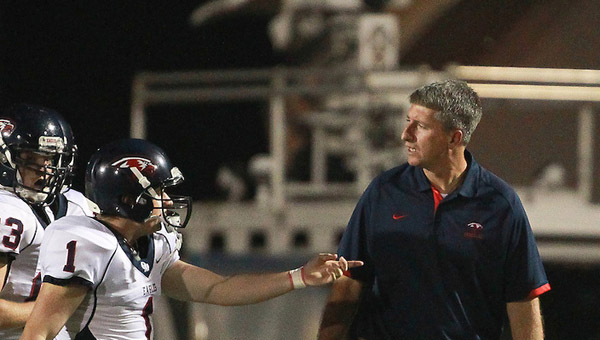 Oak Mountain’s head football coach Cris Bell was named the 7A Coach of the Year. (Contributed / Marvin Gentry at marvingentry.photoshelter.com)

Cris Bell is, by all accounts, a journeyman in the coaching world. Before his current stint as the head coach of the Oak Mountain football program he spent time as a linebackers and special teams coach in Marietta, GA., as an athletic director, and as a defensive coordinator and associate head coach at the college level with Hampden-Sydney College in Virginia, among a number of other roles. However he believes he has found a long-term home at Oak Mountain, especially after receiving the 7A Coach of the Year Award for the 2014 season.

Bell, a modest man, understands the importance of the award, saying it is “humbling and flattering at the same time” to be the recipient. He also went on to say in a Jan. 27 phone interview that “one person wins the award, but it is a representation of the whole staff and the job everyone has done.”

Bell cited Rusty Frisch, Whit Whitefield, Austin Karcher, Vance Smith and Mike Howard all as coaches who brought immense knowledge and ability to both the offensive and defensive side of the ball throughout the course of the season. Bell also named Tommy Youngblood, Chris Farrst, Wade Lion and Riley White as the ninth-grade coaches who are responsible for developing young talent to come play at the varsity level.

“We’ve also got great kids,” Bell said. “Our kids work extremely hard and they just have a spirit about them that just won’t allow them to quit.”

Oak Mountain was picked to finish anywhere between sixth and eighth in their eight-team region “by everyone outside our locker room,” said Bell. They finished the year with a 10-2 record and an appearance in the state quarterfinals.

In three years manning the helm for the Eagles, Bell has amassed a 21-12 record.