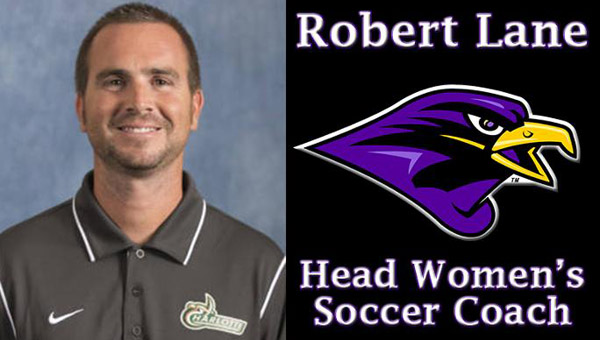 Robert Lane has been named the new head coach of the University of Montevallo women’s soccer program. Lane is the fourth head coach in the program’s history. (Contributed)

MONTEVALLO– The University of Montevallo athletic department has announced the hiring of Robert Lane as the head women’s soccer coach. He is the fourth head coach in the program’s history.

Lane comes to Montevallo after serving as the assistant women’s coach at the University of North Carolina at Charlotte. He was in that role with the 49ers for four seasons.

“I just want to thank Dr. Stewart and Mr. Richard for the opportunity to join the Athletic Department here at Montevallo,” said Lane. “From the moment I stepped on campus I realized how special the University of Montevallo is as well as the potential this Athletic Department can achieve. The staff here understands the importance of developing a culture of success both on and off the field, and I’m eager and excited to get started as we look to move the program forward.”

“We’re excited about the addition of Robert Lane to our coaching staff,” said Athletic Director Mark Richard. “He has a proven record of success, both in terms of wins and losses and academic achievement, which will make him a perfect fit at Montevallo.”

Prior to UNC Charlotte, Lane was the head coach at fellow Division II University, Belmont Abbey.  Lane had tremendous success in his two years with the Crusaders, amassing a record of 31-7-3 and winning Conference Carolinas Coach of the Year in 2010.

Lane is a graduate of East Carolina University, holding a Bachelor of Science Degree in political science. He played collegiately both at ECU and Barton College.