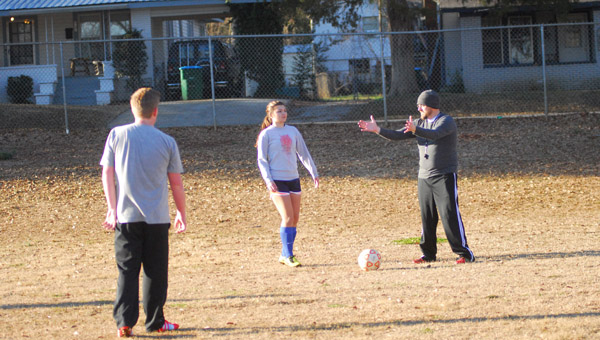 Chris Galloway (in hat) directs players where to go during a drill on Jan. 26. Montevallo is beginning its second season with a soccer program. (Reporter Photo / Baker Ellis)

MONTEVALLO- Chris Galloway is not worried about his teams’ youth. The second-year coach in charge of the second-year soccer program at Montevallo High School is excited to build on the first-year success of both the girls and boys teams, where Galloway serves as the head coach for both programs.

Galloway, a graduate of Samford University in Birmingham, came to MHS to spearhead the effort to bring soccer to not just the high school, but the community as well.

“Soccer is new to Montevallo,” Galloway said. “We just had a youth league start for the first time this past fall (2014). So it’s very new to the area.”

Galloway and MHS are excited about the future of the newest addition to the sports landscape at the high school, and Galloway believes “the future is bright” for both programs.

For the girls team leading into the 2014-15 season, Lupe Serrano and Claire Gray will look to shoulder the scoring load for the Lady Bulldogs, while Diatrize Chavez will be counted on to be, as Galloway said, a “do-it-all player” who will be asked to play any position from goal keeper to goal scorer.

On the boys’ side, Greg Spence is a first-year player as a senior, but is the “class president guy who will bring some senior leadership to the team,” Galloway said. Luis Ayala will be counted on from a skills standpoint to lead the program on the field.

Both teams will start the season at Ellwood Christian on Feb. 10, with the girls playing first at 5:00, followed by the boys game at 7:00.