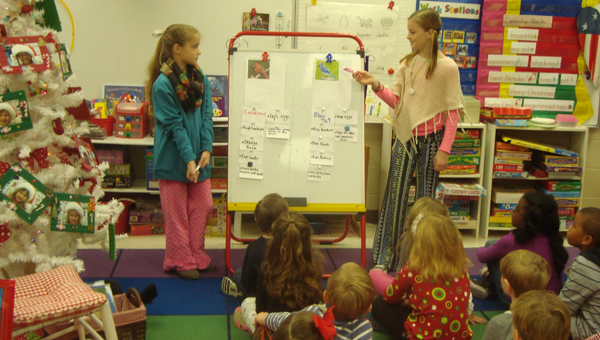 HOOVER—Alabama is blessed with a wide variety of native birds, but when Greystone Elementary School fifth grade teacher Amy Williams asked her students about some of the birds they saw outside the classroom window, she realized many were uninformed of the nature surrounding them.

“They knew nothing about the nature and beauty around them,” Williams said.

Williams was inspired to teacher her students about nature and the environment in an interesting, practical and fun way. She devised and received a $2,000 grant for the project, which she titled “For the Birds.”

“I envisioned that I wanted our school to learn how to take care of the animals and the plants within our area,” Williams said. “I wanted to teach the children how to be caretakers of our planet.”

Throughout the year, Williams’ students learn to identify native birds, map their migratory patterns and track the birds that feed on birdfeeders throughout the Greystone Elementary School campus.

Students also explore the ecosystem and the impact of pollutants by analyzing and graphing the impact on food chains, bird populations and the factors leading to extinction.

“The things that we do can have major effects on animals and plant species in just our back yard,” Williams said.

The final product is a hardcover book created by each student, filled with information, illustrations and fun facts about their favorite native birds.

“It’s my favorite, I can see them around my house,” Mardis said.

“The reason I don’t have a bird on the cover is because there are so many cool birds that I don’t know which one to put on there,” fifth grader Michael Wolkow said while holding up his book.

However, the knowledge is not just contained within the walls of Williams’ classroom, part of “For the Birds” is sharing the information with others.

“We, as a class, thought, ‘How can we show them more of what we know?’” Williams said. “We feel that it’s important that we share our knowledge with the rest of the school.”

Williams’ class created informational posters about native birds and placed them throughout the school. The students teach their peers by leading lessons in other classrooms.

“We focused on the flight feather and plumage,” fifth grader Brooke Stroup said, explaining she and classmate Barbie Allen taught a kindergarten class about the Blue Jay.

“We made cards for them and it said the facts for them about the birds,” Allen added.

“For the Birds” has been well received by the Greystone community, and Williams said other teachers have expressed interest in the project for the next school year.

“It’s a great learning experience,” Williams said. “I think the sky is the limit as to what we can learn about these birds.”