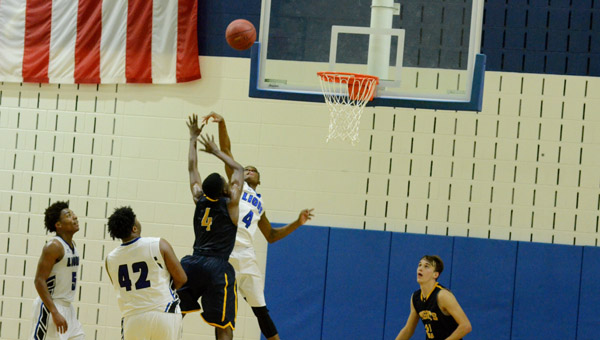 Reggie Mann of Kingwood Christian skies for a rebound in an earlier contest this year. He helped lead the Lions to a victory over Lee-Scott on Jan. 29 by a score of 59-56. (Contributed / Dianne Cunningham)

GLENWOOD- Going into the Jan. 29 contest with the Lee-Scott Academy Warriors, Kingwood head coach Danny Davis felt confident in the team he was putting on the floor.

“It’s a new season,” said Davis, speaking of the postseason tournament. “We have all of our pieces and are a full team now. No one is hurt, sick or out of pocket.”

With the full weight of the Lions’ roster able to take the court on Thursday night’s contest, Kingwood was able to escape with a three point, 59-56 victory to stay alive in the 3A region 1 AISA tournament.

The contest opened up closely enough, with both teams trading buckets on the way to a one-point Lee-Scott advantage at the end of the first quarter, 16-15. Kingwood was able to take the lead moving into halftime behind strong play from Reggie Mann and Justin Gibson, 30-29.

The Lions came out in the third quarter firing, and held Lee-Scott to just four third quarter points on their way to opening up a 49-33 lead over the Warriors. Kingwood needed every point of the cushion going into the fourth quarter, however, as they gave up the 16-point lead during a furious Lee-Scott fourth quarter charge. The Lions held on to win down the stretch thanks to contributions from Mann, Gibson, EJ Grant and Josef Ransom.

“Reggie and Justin played a very all-around game for us,” Davis said. “They really set the tone for us as leaders. And EJ Grant and Josef played a very good game (as well).”

Kingwood moves on to play Bessemer Academy in the semi-finals of 3A region 1 tournament, which will take place on Jan. 30 at 3:30 p.m.

Chelsea’s Aaron Washington drives into the heart of the Montevallo defense on Jan. 29. Montevallo mounted a second-half comeback and... read more