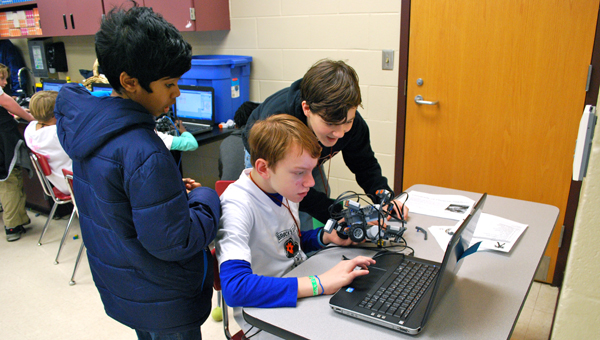 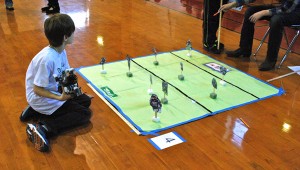 Each school brought a team of students to compete at Greystone Elementary School. Teams were split into smaller groups of three to four students per robot, Greystone resource and enrichment teacher and tournament organizer, Mandy Fox, said.

“They all have 10 different challenges they’re working on,” Fox explained, noting each team received the challenges when they arrived at the competition. To go along with the Super Bowl weekend, each challenge was NFL-themed.

Programming rooms were set up in the school’s two computer labs and challenges were arranged in the cafeteria and gym.

“They’re excited and they’re learning,” Fox said. “They love it.”

The Jan. 31 tournament was one of three the Greystone Elementary School robotics team will compete in this year. In addition to tournaments, the 21 students meet each week to build, practice and program, Fox said.

“It’s breaking down a task into small, manageable tasks,” Fox said, adding the students also must use an “incredible amount of math” and “a great deal of technology.”

At the end of the tournament, total scores were tallied for each team and the top three teams were recognized for their success, Fox said, adding all participating teams demonstrated their hard work.