COLUMBIANA – A 32-year-old Alabaster man who has been charged with allegedly exposing himself to minors in the Pelham Walmart parking lot has been indicted on the charges, and is scheduled to appear in court in late April. 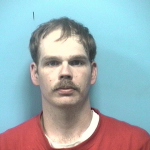 A Shelby County grand jury during its October 2014 session indicted Daniel Clayton Patterson, who lists an address on Third Street North in Alabaster, on one felony count of possession of a controlled substance and one misdemeanor count of indecent exposure.

The Pelham Police Department arrested Patterson and charged him with the two counts on Oct. 24, 2013.

Pelham Police Department Deputy Chief Larry Palmer previously said the arrest came after the department received a report of a man allegedly inappropriately exposing himself from a pickup truck in the Walmart parking lot.

After arriving on the scene, police located the suspect’s vehicle and allegedly discovered prescription drugs, including hydrocodone, in the man’s vehicle, according to Palmer.

Patterson originally was scheduled to appear for a preliminary hearing at the Shelby County Courthouse on Feb. 2, but his court date was continued until April 27 at 8:30 a.m.