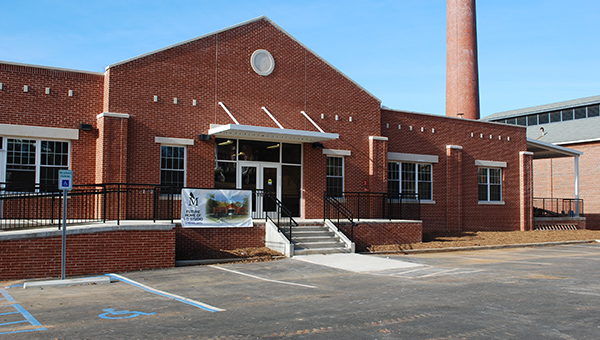 The new 3D Art Building opened at the beginning of the semester in January and UM art majors can now take advantage of the larger space the new building provides. (Reporter Photo/Graham Brooks)

MONTEVALLO–The University of Montevallo got a new addition to its art department this semester, and students and professors are already taking advantage of the new 3D art building on campus.

The new 3D art building sits where the former laundry building sat from 1908-2013.

When plans began for the new 3D art building, the laundry building was found to be structurally unsound. The building was torn down and the new 3D facility was constructed on the same space.

The 3D building honored the old laundry building with a red brick façade with a triangular gable and preservation of the limestone window still bearing the 1908 date of the original structure can be seen on the front of the new building as well.

Some of the features of the new 3D building are two patios that could be used for kiln and metal arts with a loading dock, a clay mixing area, new ceramic studio, a 3D design classroom, a bigger metal shop space, a tornado safe room and more.

The architectural company TurnerBatson designed the new building and Art Professor Scott Meyer praised the company for allowing them to use their input in the design of the building.

“We have professional grade space now that we didn’t have before on campus,” said Meyer. “We got to design it within reason and within a certain space, but we got the ability to say this is what we want. Its like Christmas has come later this year and we have things delivered all the time now.”

The students who will benefit from the space will be any art majors who work with clay, 3D design work, kiln building, metal work, sculpture and more. There are eight different concentrations students can focus on and introduction classes and advanced classes will be taught in the building.

A reception will be held on Saturday, Feb. 14, at 11 a.m. to officially open the building during UM’s homecoming festivities.