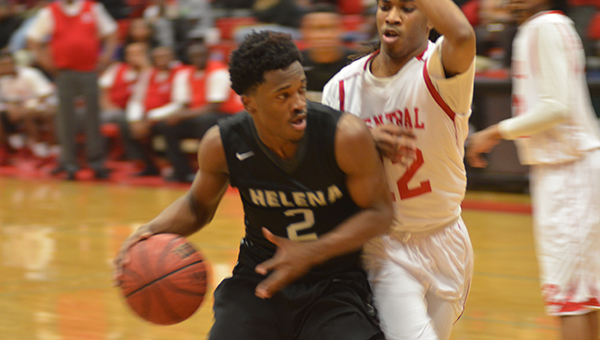 Paul Brown (2) of Helena tries to drive around a Central defender. Helena lost 65-53 in the Class 5A Area 7 Tournament Championship. (Reporter Photo/Graham Brooks)

TUSCALOOSA–A tough third quarter for the Huskies that saw Central outscore Helena 20-12 was all the cushion the Falcons needed to win the Class 5A Area 7 Tournament Championship 65-53 on Thursday, Feb. 5.

Helena began the game getting some easy baskets breaking Central’s press defense. The Huskies scored 20 first quarter points capped off by Aaron McIver’s three-point basket at the buzzer that gave Helena a 20-16 lead.

Central fought back in the second quarter, with Helena turning the ball over numerous times near the end of the quarter. Central led 26-24 at half with David Robinson scoring 9 first half points. Robinson finished with a game high 28 total points.

Jon Brown led Helena in scoring with 13 points in a losing effort.

At the start of the fourth quarter, Helena trailed by 10 and tried to get back in the game, but was unable to sink enough baskets.

Helena was playing on the road in Tuscaloosa but it was hard to tell as the majority of the gym was packed out with black and blue in support of the Huskies.

Helena head coach Chris Laatsch was proud of his team’s effort and gave Central a lot of credit after the game.

“Down two heading into half you feel pretty good,” said Laatsch. “That’s a final four team from a year ago and a lot of tradition here. We just couldn’t get going and dug ourselves that hole but then fought all the way through battling and competing.”

Helena is not done yet, as they will advance to the Sub Regional Tournament on Tuesday, Feb. 10. They will find out their opponent on Saturday, Feb. 7.

Laatsch wants his team to continue to work on the basics and fight and battle like they have the past couple games.

“We’ll get back to trying to get fundamental and basic and see if we can’t upset somebody,” said Laatsch.

Drew Marling (12) of Calera attempts a shot in an area tournament game against Helena. Helena won 48-47 to advance... read more