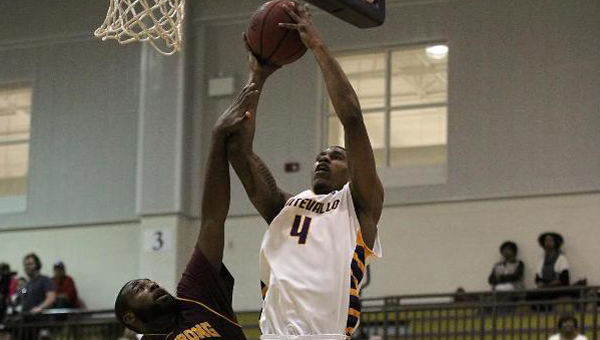 Larry Slaughter and the Montevallo Falcons are on a seven-game win streak following their 69-59 win against Georgia Southwestern on Feb. 4. (Contributed)

MONTEVALLO- The University of Montevallo men’s basketball team remains in first place in the Peach Belt Conference after their seventh straight win, defeating the Georgia Southwestern Hurricanes 69-59 in a rematch of last year’s opening round game in the NCAA Tournament.

The visiting Hurricanes relied on their three-point shooting and rode consistent success from the beyond the arc to a 30-28 lead at the half.

Georgia Southwestern attempted 26 field goals in the first half, 15 of which were from three-point range. The visitors made 40% of their shots from distance, led by Deric Rudolph’s three triples on 60% shooting from deep. Rudolph leads the PBC in both three-pointers made and three-point percentage.

In the first half, the Montevallo offense was paced by senior Shykeem Jackson, who scored 13 of the Falcons’ 28 points. Jackson went 5-for-6 from the floor in the opening half and hit 75% of his three-pointers.

Troran Brown, the reigning conference player of the year, was held scoreless after 20 minutes, but still managed to make his presence known. The senior from Phoenix, Arizona had six assists in the first half. No other player in the game had more than one.

Things would change for Brown in the second half, as he would find his stroke from the field. Brown scored the first six points out of the locker room for the Falcons in half number two.

A 9-2 run for the Falcons less than halfway through the second half allowed the home team to put themselves back out in front, and they would not relinquish the lead the remainder of the way, winning 69-59.

Overall, Brown finished with his fourth double-double of the year behind a season-high 13 assists. He also finished with 10 points, all of which came in the second half.

Jackson was an offensive standout for UM, scoring a game-high 24 points. He was 9-for-13 from the floor and was 6-of-8 from three-point territory, tying his season-high in points scored. For the third straight game, Jackson did not commit a turnover.

Senior Larry Slaughter recorded his eighth double-double of the year, grabbing a game-high 11 rebounds to go along with 16 points.

Montevallo (16-7, 12-1) is in first place in the Peach Belt Conference and will travel to North Georgia thisSaturday, February 7, for the second meeting of the year with the Nighthawks.

Troran Brown and Montevallo are in control of the Peach Belt after their 83-64 win over Armstrong State. (Contributed) FROM... read more