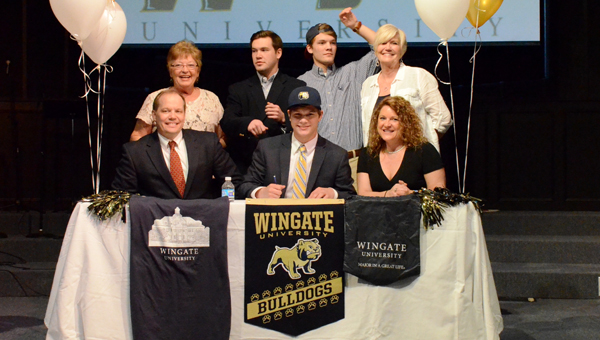 ALABASTER- Gage Sumrall’s decision to play college football was not a difficult one. Sumrall comes from a house of football players, and has been surrounded by the sport for a number of years. His older brother currently plays for Birmingham-Southern, and the Sumrall family played surrogate family to two boys who signed Division I football scholarships last year as well. One of those boys was C’yontai Lewis, current Florida tight-end and former Kingwood standout.

Sumrall, who has been at Kingwood since the sixth grade, will play safety in the fall for Wingate University in North Carolina, a school he has personal history with.

“I had originally visited the school when I was in middle school,” Sumrall said. “I visited for a church retreat, and it just ended up being the school I picked. I really like the area.”

Wingate University is a Division II school that competes in the Southern Atlantic Conference with schools such as Mars Hill and Carson-Newman, and Sumrall said it was a speech from the defensive coaches on his recruiting visit that won him over.

“What made my final decision was when we had a meeting with the defensive coaches (Tee Overman and Rashaan Jordan) with the other defensive recruits on my visit,” Sumrall said. “He just won me over. The way he wants to play, very aggressive, hard-nosed football, that’s how I want to play.”

Sumrall is no stranger to contact, serving the role of defensive enforcer from his safety position for Kingwood during his tenure, with a self-estimated 148 tackles last year to lead the Lions.

Moving into college football will be an adjustment, Sumrall knows, and he is already taking steps to put on weight before he reports.

“Drinking a lot of chocolate milk,” he said, laughing. “I want to put on about 15 pounds before I get to school.”

Sumrall is considering enrolling in class this summer to get a jump on the adjustment process he will inevitably endure.

“I just want to make the adjustment as fast as possible,” Sumrall said.

Paul Brown (2) of Helena tries to drive around a Central defender. Helena lost 65-53 in the Class 5A Area... read more