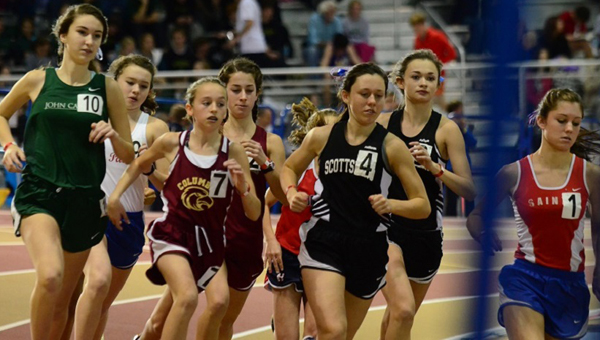 BIRMINGHAM- A number of local schools competed in the Indoor State Championships that took place in the Birmingham Crossplex from Feb. 6-7. The indoor track meet grouped 1A-3A schools together, 4A-5A schools together and left 6A and 7A schools by themselves to create four divisions of competition.

The Pelham girls team edged out Homewood to win the girl’s 6A championship highlighted the meet, which saw Westminster School at Oak Mountain, Helena, Pelham, Thompson, Spain Park and Oak Mountain High School break into the scoring column. Mary Grace Strozier was the highlight of the day for the Lady Panthers, winning the 3,200-meter run, the 1,600-meter run by 23 seconds, the 800-meter run, and finishing sixth in the 400-meter dash to give Pelham 33 points by herself. Amelia Guthrie finished second in the high jump, and Melanie Taylor finished second in the triple jump along with finishing sixth in the 60-meter hurdles. Pelham finished with 105 points, beating out Homewood by two points to clinch the 6A indoor title.

In the 1A-3A division, Maddie Hoagland scored points in the 800, 1,600 and 3,200-meter races for Westminster’s girls team. The boy’s team for Westminster finished third overall for the day behind a number of impressive performances, including a first-place finish from the 1,600-meter relay team, and a pair of second-place finishes by Scott Landers in the 800 and 1,600-meter races that saw him miss first place by less than seven-tenths of a second in each event. Wiley Boone also finished second and third in the triple jump and long jump, respectively.

Helena’s boys and girls team competed in 4A-5A competition, and was highlighted by performances from Quaina Moore, who finished second in the 60-meter dash, and Claire Vaughn, who placed in the 800, 1,600, and 3,200-meter runs for the girls team. Blake Vaughn finished third in the 1,600-meter run and seventh in the 800-meter run for the boys’ team, which also saw a fourth-place finish from its 4×800-meter relay.