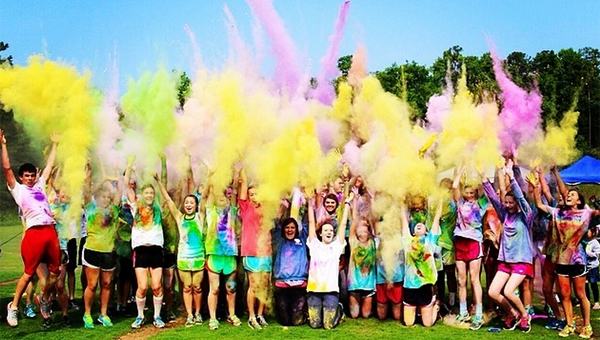 Sponsored by the OMHS Student Government Association, the Color Run stands out from any other 5k race because it is entirely student-organized and student-run, SGA advisor John Milton explained. The race trail also features colorful powder, giving it a unique and fun flair.

“Essentially, it’s a 5k, but we have this non-toxic powder that is colored,” Milton explained, noting the race has a “party atmosphere” and runners end up with “a tie-dyed shirt” when they finish the course.

The run was started last year by two OMHS seniors, Mollie Shealy and Mandy Kelly, in honor of their grandparents who had been touched by cancer, Milton explained. The two students organized, promoted and found sponsors for the first edition of the run, which was held at Oak Mountain High School.

“I thought it was pretty cool for two high school seniors to do in the spring of their final semester,” Milton said.

OMHS juniors Emily Lyons and Julia Buckner and sophomore Claire Kendrick have taken the lead in organizing this year’s edition of the color run, which will include vendors along with the 5k race.

Registration for the event is $40 per runner and can be completed online at Active.com/pelham-al/running/distance-running-races/oak-mountain-color-run-2015. Along with online pre-registration, participants will receive a white T-shirt to wear for the run.

Since the entire event is student run, Milton said 100 percent of the proceeds will go toward cancer research at UAB.

“Every single penny they put into this event goes straight into cancer research… we can really give them 100 percent,” Milton said. “When people know 100 percent of their money is going to support cancer research and an organization right in their back yard, they get really fired up about it.”

The second annual OMHS Color Run will start at 8 a.m. on March 14. More information can be found at Omsga.com/oakmountaincolorrun.

Culinary students put their skills to the test at Jeff State