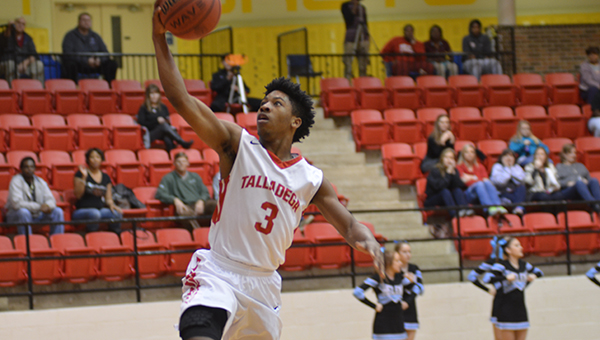 Josh Madden (3) of Talladega goes up for a dunk in the first quarter against Helena. Talladega defeated Helena 95-62 in the AHSAA Sub-Regional 5A Tournament. (Reporter Photo/Graham Brooks)

TALLADEGA–Helena’s season came to a close on Tuesday, Feb. 10 after losing to the Talladega Tigers 95-62 in the AHSAA Sub-Regional 5A Tournament.

Helena had no reason to hang their heads as they completed their first season as a basketball program as Class 5A Area 7 runner-ups and lost to one of the top ranked teams in the state in the sub-regional round on the road.

Helena head coach Chris Laatsch completed his first year at the helm and he’s already set a high standard after Helena’s inaugural season as a program.

“I’m real proud of their growth and somebody said from the state that we’re the first first year program to ever qualify for the state tournament so that’s a great accomplishment,” said Laatsch. “Our kids fought and believed and we just ran into a really good team tonight.”

Both teams opened the game with hot shooting as they combined to hit 10 three-pointers in a fast-paced first quarter that ended with Talladega on top 25-20.

D’Angelo Scales of Talladega scored 12 of the Tigers 25 first quarter points and finished the game with 17 points.

Josh Madden of Talladega led all scorers with 36 points in the game.

The second quarter is where Talladega’s trap defense in the front-court gave the Huskies some problems. The Tigers opened the quarter with a 9-0 run and capitalized on the Huskies turnovers as they led 50-31 at halftime.

Talladega continued to be successful on offense in the second half finishing the game with 95 total points.

Jon Brown led Helena with 15 points in a losing effort.

Laatsch was disappointed that his team lost but was proud of what they accomplished this year.

“Our kids have had an unbelievable year and nobody would’ve dreamed that we would’ve had the year that we had and I cannot be more happy and pleased with them,” said Laatsch. “Obviously would’ve like to of won but it doesn’t change the way I feel about what they’ve accomplished this year.”