Thompson edges out Oak Mountain by less than a point, wins AHSAA 7A South Super Section 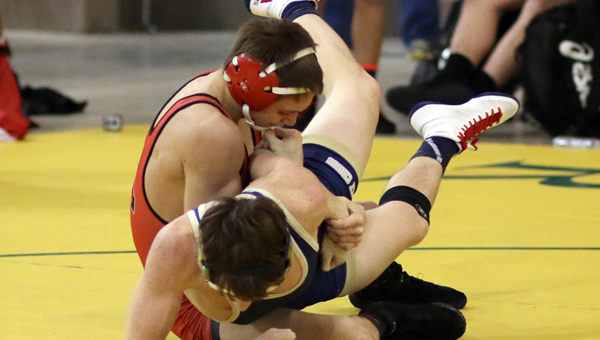 Dominic Latona (left) helped lead the Thompson Warriors to a razor-thin victory in the 7A AHSAA South Super Section over Oak Mountain. (Contributed)

MONTGOMERY- The 7A AHSAA Super South Section wrestling tournament took place on Feb. 6 and 7, and saw the Thompson Warriors come out in first place of the 11-team field by an incredibly small margin of .5 points over the Oak Mountain Eagles by a final score of 209.5-209.

Thompson, which has been the perennial wrestling powerhouse in Alabama for the last five years, needed peak performances from every one of their wrestlers to squeak the tournament victory away from Oak Mountain.

The Warriors also had four wrestlers finish in second place in their divisions, and defeated Oak Mountain in head-to-head bouts by a slim margin, 4-3.

One of the Eagle victories over the Warriors came via Michael John Harris, who was the only Oak Mountain wrestler to win his weight class on the day, defeating Jacob Megois of Thompson on his way to his 132-pound first-place finish.

Spain Park also competed in the 7A meet where they finished with 55.5 points, and was led by Leon Strong and Kevin McClure, as the Jaguars have been all season. Strong and McClure came in first place in the 152-pound and 220-pound weight classes, respectively. During the tournament, McClure set a Spain Park school record for career wins with 190 during his semi-final match.

The AHSAA wrestling championships will take place from Feb. 12-14 in Huntsville.

Melvin Owens, with his parents, signed his letter of intent to play football for Mississippi Valley State University on Feb.... read more