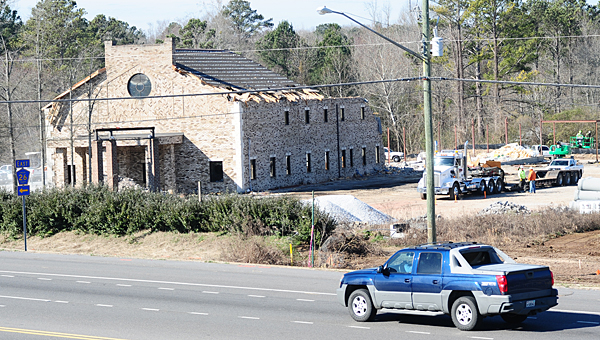 Crews work to tear down the former A-1 Sand and Brick building off Alabama 119 on the morning of Feb. 13. (Reporter Photo/Neal Wagner)

ALABASTER – Crews have begun demolishing the former A-1 Sand and Brick building on Alabama 119 across from Zaxby’s to make way for a new Walmart Neighborhood Market building.

On the morning of Feb. 13, crews using excavators had begun tearing down the back walls of the large former A-1 building near the intersection of Alabama 119 and Fulton Springs Road.

For the past few years, the brick building housed the Seed Design company before a developer purchased the land to construct the Walmart Neighborhood Market.

The Walmart corporation is planning to construct the new Neighborhood Market grocery store and gas station on Alabama 119 across from the Zaxby’s restaurant.