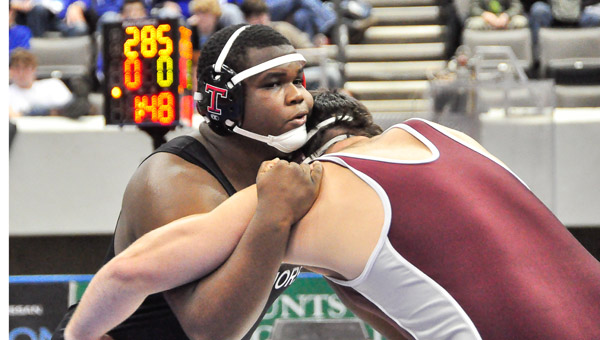 TJ Rayam of Thompson won his second-straight 285-pound individual state title while leading the Warriors to their fifth-straight state championship on Feb. 14. (File)

HUNSTVILLE- The machine that is Thompson High School wrestling churned out another state championship title on Feb. 14, which was the culmination of a three-day state tournament in Huntsville.

Thompson, the four-time defending 6A state champion, was firmly in first place of 7A competition heading into the last day of the tournament with 125 points, leading Vestavia Hills by 25. Head coach for Thompson Shawn Weltzin had 10 wrestlers compete in the state championship meet, those being Gabe Hixenbaugh, Cody Mealer, Dominic Latona, Nicholas Mobley, Luke Hester, Luke Moore, Trey Watson, Jacob Megios and Austin Akins and TJ Rayam. Of the 10 competitors Thompson sent to Huntsville, three of them were crowned individual state champions, and Thompson won the 7A title with 140 points.

Rayam, a junior, was one of the individual state champions for Thompson. Rayam is no stranger to success on the big stage, and has been one of the leaders for the Warriors this season after coming off his first individual state championship last year in the 285-pound weight class. He finished the season with an astonishing 59-3 overall record and continued his dominance in the 285-pound class with his second-straight individual state title. He will look to once again defend his title as he moves into his senior year.

On the other end of the spectrum, the future for Thompson seems to be in good shape with the likes of eighth grader Hixenbaugh in the ranks. Hixenbaugh amassed a 27-1 record on the year in the 106-pound weight class and was able to win the individual 106-pound state title with a 9-2 decision over Alex Thomas of Oak Mountain in the finals.

Thompson has now won five state championships in a row, which is the second-longest streak in Alabama state history, trailing only the 11-year run by Benjamin Russell from 1959-1969.

Indiah Cohill and the Thompson Lady Warriors dropped a hearbreaker to Hazel Green on Feb. 12 during the 7A playoffs.... read more