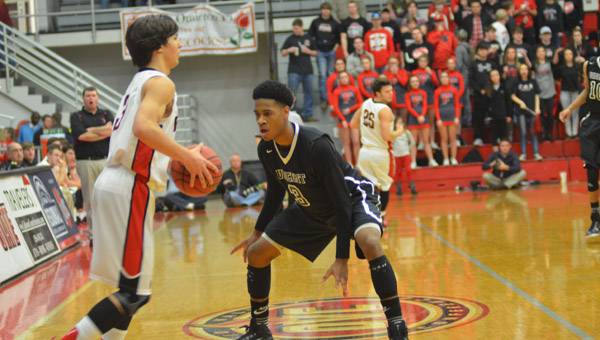 JACKSONVILLE- The Red Devils of Fyffe did not lay down quietly for the Vincent Yellow Jackets in the championship game of the 2A Northeastern regional final on Feb. 17, but in the end, the Yellow Jackets made enough plays to get the job done. In a back-and-forth contest, Vincent came away victorious with a satisfying 51-45 victory to move into the 2A Final Four.

Fyffe, fresh off an undefeated 15-0 campaign in football, came into the contest hoping to carry on that athletic success on the basketball floor.

“We didn’t expect it to be easy,” Vincent head coach John Hadder said after the game. “We knew they had a bunch of kids that were expecting to win. Last year we played Tanner in the regional final and they were coming off a football championship, so, a lot of times when stuff like that happens it carries over and breeds into a certain culture where you expect to win no matter what you’re playing.”

From the opening tip the first quarter was a battle. Vincent raced out to a 9-5 lead behind four early points from Jace Greene, but Fyffe fought back to take a 13-12 lead into the second quarter.

The second period did not fare well to Vincent, as they only managed 3 points in the entire quarter. Fyffe was playing a sagging 2-3 defense to try and eliminate the inside presence of Jacorey Roper and Wesley King, and dared Vincent to take outside shots, which they did with little efficiency. The Yellow Jackets could not get anything going on offense as Fyffe jumped ahead 24-15 at the half.

If the second quarter was Fyffe’s turn to catch fire, the third quarter was absolutely Vincent’s. The Yellow Jackets scored 7 points in the first 48 seconds of the third quarter, and scored the first 13 points of the half to take the lead back. Once Vincent regained the lead in the second half, they would never relinquish it the rest of the way. Fyffe would tie the score for a moment at 48-48 in the third, but a three by Roderick Brown gave the Yellow Jackets the lead permanently, and would go on to win 51-45.

Roper finished with 20 points and Greene finished with 14 points and seven boards. Roper, Greene and Najar Williams were named to the All Region team, and Roper took home the MVP of the region.