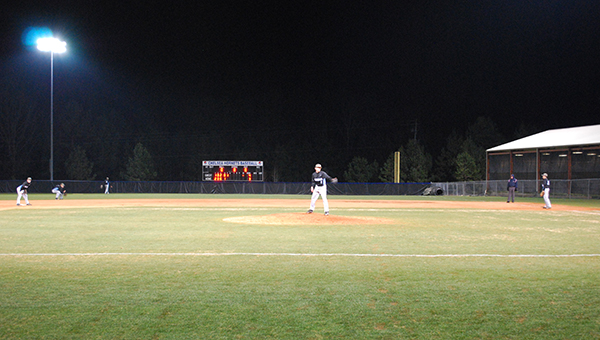 CHELSEA–Below-freezing temperatures and a tough road opponent to open the season could not stop the Helena Huskies, as they recorded their first win in program history, defeating the Chelsea Hornets 5-3.

The Huskies opened the season playing in the Chelsea/Montevallo Tournament and had a back and forth affair before coming away with the victory on the road.

Helena starting pitcher Brooks Freeman recorded the win for the Huskies after allowing three runs while striking out five on four innings pitched.

Helena’s bats got going early when Devan Walker led off with a single and then recorded a stolen base moving to second. Later in the inning, Sam Praytor grounded out to second base scoring Walker, giving Helena a 1-0 lead.

Chelsea battled back in the bottom of the first inning, loading the bases with one out. The Hornets managed to score two runs. The first came when Joel Cheatwood was hit by a pitch allowing Tanner Masters to score from third. With the bases still loaded, Jacob Green was able to score when AJ Jones hit into a fielder’s choice putting the Hornets back on top 2-1.

Helena relief pitcher Riley Davis came into the game in the bottom of the fifth inning with the Huskies up 4-3 and held the Hornets scoreless over the next three innings. Davis gave up three hits, allowed no earned runs and struck out three while issuing no walks.

Helena added one run in the top of the sixth making the score 5-3.

Helena head coach PJ Guy described the feeling of getting the first win in program history.

“It feels great, it was special tonight just to finally get to this day and just get these kids on the field and represent this high school and the great town of Helena,” said Guy. “Then to come out here on the first night and actually get a W out of it, I was proud of the kids. They did a great job and overcame a lot of tough situations in the game.”