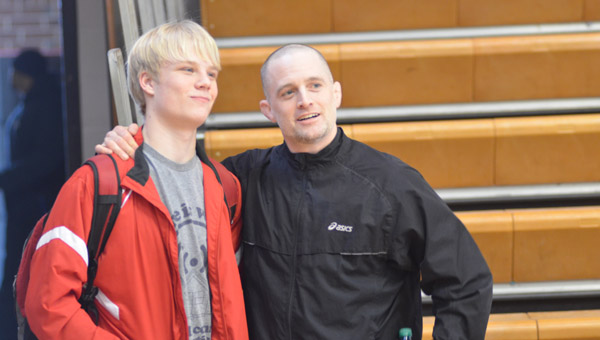 ALABASTER- The Thompson High School wrestling program is one of the most dominant athletic programs in Shelby County at the moment, as they are winners of the last five wrestling state championships they have competed in, the first four being in 6A competition and the most recent being in 7A.

Such consistent success can be attributed to both the athletes who compete and the coaches who foster a winning community. Head wrestling coach Shawn Weltzin has been able to create a sustainable culture that breeds championships by moving wrestlers into the Thompson machine at an early age.

Weltzin, a Pelham High School grad, wrestled at the college level at the University of Tennessee-Chattanooga, but knew even before then that he wanted to be a coach.

The journey has not been easy for Weltzin or the Thompson wrestling program. He is the only head coach Thompson High School has ever had, and was at the helm when the program began in 2007.

“We placed 26th (at state), 26th and then fourth,” Weltzin said regarding the first three years of the program. “And then first from there on out.”

Weltzin credits the jump from the first two years to the success from then on to the wrestlers within the system growing older, as most of the wrestlers were young from Weltzin’s time at the middle school.

“Everybody kind of does the same moves in wrestling,” Weltzin said. “So it all boils down to how you train and your mentality.”

The middle school athletes practice at the same time and place as the high school, and everyone goes through the same drills, so when it is time for the next crop of freshmen to come into the program, they are already well acclimated to the culture, and practice structure does not change at all.

The record for most state wrestling championships in a row is 11, and was set by Benjamin Russell from 1959-1969. There are a number of schools that have won four in a row over the years, but Thompson now sits alone in second place at five. As far as chasing that seemingly daunting number, Weltzin doesn’t discount the possibility.

“It’s all about how much pride they (wrestlers) want to take into it (the team),” Weltzin said. “If the kids want to take pride in that, there’s no telling how far this could go.”