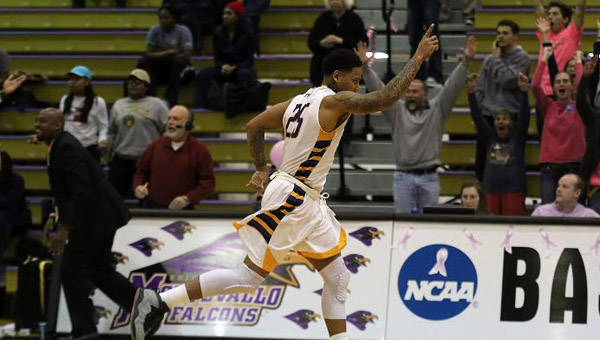 Troran Brown of Montevallo led the Falcons to a one-point, 74-73 win over Columbus State on Feb. 18 to give the Falcons their fourth straight PBC West title. (Contributed)

The Falcons defeated the Cougars by a final of 74-73.

To open up the game, Columbus State scored the first nine points before Montevallo responded with a 29-13 run. The run culminated with UM extending its lead to a game-high seven points with 5:42 remaining in the half.

Troran Brown ended the run with eight straight points on his way to a game-high 16 points in the first half.

In the second half, the game was an incredibly tight contest. Fighting for their opportunity to remain in the hunt for a conference championship, Columbus State erased the halftime deficit less than seven minutes after the team returned to the floor.

For a period of more than 13 minutes, the teams traded the lead on several occasions, but the gap between the two sides never exceeded three points.

With less than two and a half minutes showing on the clock, Brown finally pushed the Falcon lead to two possessions, hitting one of his five three-pointers on the night.

Five straight points for Columbus State tied the game yet again with just over a minute to play, but Brown then proceeded to make two free throws to put the Falcons back on top.

Senior Larry Slaughter then made two shots from the line to extend the UM lead even further, making it a two-possession, four-point game with 32 seconds to play.

Brent Jackson made a three for the Cougars with 10 seconds to go in the game, cutting the Falcon lead to just a single point. A Montevallo turnover on the inbounds play gave Columbus State a chance to win before time ran out, but the visiting Cougars could not convert.

Dalton Skinner placed third overall at the Spring Kickoff Intercollegiate at the Golf Club of Fleming Island, Fla. while the... read more