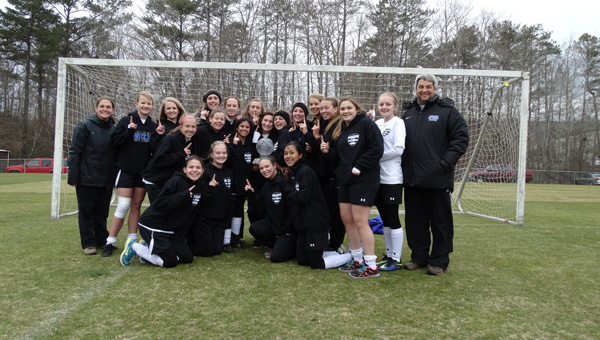 The Chelsea Lady Hornets won the Gold Division of the Lakeshore Shootout with a 3-0-1 record on the tournament. (Contributed / Sherri Fauer)

The Lady Chelsea Hornets entered the Lakeshore Shootout, which took place from Feb. 20-21, as the second-ranked team in class 6A. In game one, the Lady Hornets faced Northridge. The two teams met last year in the first round of the 6A playoffs where Chelsea earned a come-from-behind 3-2 win. In this contest, both teams looked to get on the board early, but shots were not on frame. Chelsea settled in and began to control the possession and pace of the game. Junior forward Megan Young broke the deadlock with an assist from Madeline Guillen to put Chelsea up 1-0 in the first half. In the second half, Chelsea continued to exert pressure, and midway through the second half freshman Maddison Martin finished off the scoring for a final of 2-0.

The second game of the evening featured defending 1A-3A state champion Montgomery Academy.  In spite of the weather and field conditions this was a closely contested game, and both keepers made outstanding saves to preserve a 0-0 tie.

On Saturday, the Lady Hornets opened up with a contest against Homewood. The game started with both teams looking for a quick strike to get ahead yet both teams defended well and the keepers made some tremendous saves early in the game.  At the twelve-minute mark, Homewood was called for a foul just outside of the penalty area resulting in a direct kick. Martin took the free kick sending a rocket of a shot to the backside netting to put Chelsea up 1-0. Martin and Guillen would both add another goal in the game as Chelsea won 3-0.

The final game of the day featured Chelsea taking on Shades Valley.  At this point, Chelsea had moved into first place based on results for other Gold Division morning games.  Chelsea’s Young scored twice in the first half with assists from Martin and Guillen, and the Hornets won 4-0.

At the conclusion of the tournament, Chelsea was crowned the Gold Division champion.  All-Tournament players from Chelsea were Martin, Guillen, goalkeeper Sabrina Lang, and Young. Young was also named tournament MVP.