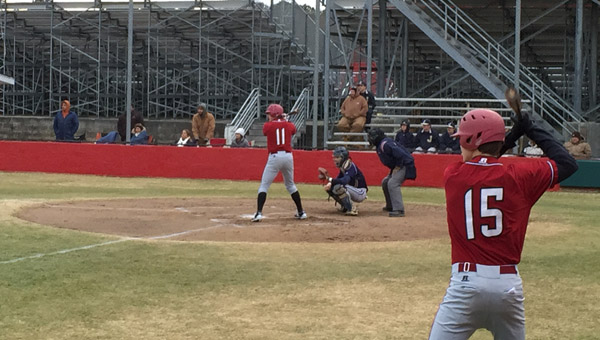 The Shelby County Wildcats beat Jemison at home on Feb. 20 by a final of 6-1. (Contributed)

COLUMBIANA – On a Feb. 20 showdown between the Shelby County Wildcats and the Jemison Panthers at Shelby County High School, the Wildcats were able to take care of business, and walked away with a 6-1 victory on the night.

The dreary February evening did not put a damper in the energy of Shelby County, who came out with energy and intensity against the Panthers. “It was a great atmosphere for baseball,” Shelby County head coach Shane Beasely said. “(There was) a lot of energy in the air from our fans and players.”

Jemison lit up the scoreboard first, scoring a single run in the top of the first inning to get the evening started on an exciting note. That lone run would turn out to be all the Panthers would see on this night however, as the rest of the game belonged to Shelby County. In the bottom of the first, the Wildcats showed their hitting prowess by loading the bases, but came away with nothing to show for it, and Jemison led 1-0 after the first inning.

Moving into the second inning, the Wildcats scored two runs to get on the scoreboard off of a line drive from Adam Landefeld. The momentum carried over to the third, when Nick Lowey hit a two-run RBI double to make the score 4-1 in favor of Shelby County. The Wildcats would add another run in the fifth and sixth innings respectively, and finished the game with a 6-1 victory.

Spener Dill went the distance for the Wildcats on the mound, pitching a complete seven-inning game. “Spencer pitched incredible tonight,” Beasley said. “He only threw 74 pitches in the seven innings.” Kyle Cofer was 2-4 with a stolen base, while both Landefeld and Dill went 2-4 from the plate as well in the winning effort.

The Oak Mountain girls soccer program, fresh off a 6A state championship, won the Platinum Division of the Lakeshore Shootout... read more