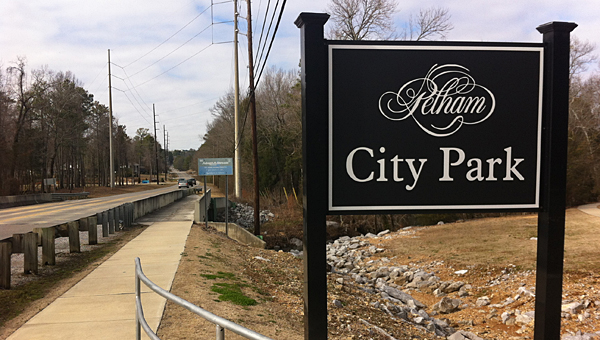 A project to add sidewalks along Bearden Road from Pelham City Park to Pelham High School is on schedule to be completed in the fall, according to city leaders. (Special to the Reporter/Grace Thornton)

PELHAM – Prep work has started for new sidewalks on Bearden Road that will connect Pelham High School to U.S. 31.

The project — several years in the making — is “right on schedule” for completion by the fall, said Rick Hayes, Pelham City Council president.

“A lot of kids travel that road, that was the biggest concern,” Hayes said. “As it stands now, there is no shoulder, no place the kids can get away from the road.”

The issue was already on the city’s radar but was “brought to a head” in 2011 when student Tyler Lee was hit by a vehicle and seriously injured.

“He was just going down to the park,” Hayes said. “He recovered, but we knew we needed to make that road as safe as possible for the future.”

Pelham Mayor Gary Waters said the project goes hand-in-hand with two other engineering projects in the area — the drainage issue and landscaping on the steep pitch outside Pelham High School.

“We got all of our engineers together in one place, and they determined what the order of work should be,” Waters said.

The decision was made to complete work on the high school’s hill surface and drainage ditch before laying the sidewalks, he said.

“To the public, it may not look like anything is happening, but it is all due process for us,” Waters said.

Hayes said the drainage ditch itself was a hazard that needed to be dealt with swiftly.

“It was an eyesore, but it was also the kind of thing that if you came out in the dark and didn’t see what was there, you could fall and be hurt severely,” he said. “This was a safety and beautification effort all in one.”

And when it is all finished, Waters said, there will be a safer entrance to Pelham High School and a safer walk for the 1.5-mile stretch along Bearden Road to the highway.

“If the new sidewalks safeguard one life, it’s worth it,” he said.

Alabaster resident William Taylor displays a photograph of himself and his late wife, Ida, at his house on Feb. 25.... read more