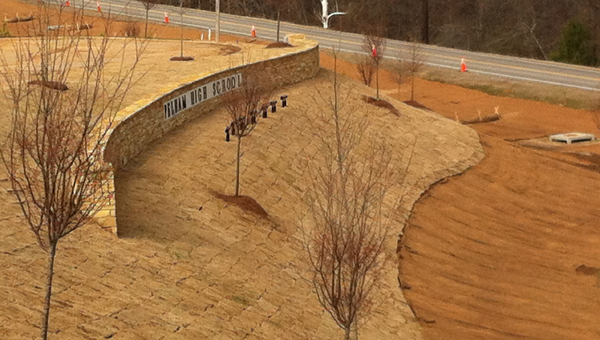 The grounds of Pelham High School are currently undergoing a $300,000 landscaping project. (Contributed)

PELHAM—A massive new sign and landscaping at Pelham High School are just “scratching the surface” of the school’s planned makeover, said Rick Rhoades, president of the Pelham Board of Education.

Rhoades said the board “had a big decision to make as far as what the future of the high school would be for the next 20 years — do we want to build a new high school or try to really make it something special where it is?”

The new sign shows that the high school is staying put and that it is going to be an even more competitive facility when the entire $12 million renovation is completed, he said.

The kickoff project, which includes the sign and landscaping on the pitch around it, came with a price tag of just under $300,000.

“We wanted to invest money wisely to make that much more appealing,” Rhoades said. “The feedback that we’ve gotten is that it has transitioned the whole atmosphere around the school, and we’re just getting started.”

He said the school board hoped to have a bid on gym and auditorium renovations by the end of the week.

“It’s going to change those buildings dramatically,” he said.

The school’s main entryway is also in line for a facelift, and some classrooms and athletic facilities need work too, Rhoades explained.

“All that is just kind of ongoing to keep the high school the great place that it is and make it even better,” Rhoades said.

In the short run, the new sign could be completed by the end of the week, as soon as electric work is finished up, he said.

“We wanted a sign that would state what the building was very clearly and in a positive way and drastically improve the entrance to the school,” Rhoades said.

Landscaping on the pitch behind it may take longer, but should be done by the end of the school year. Managing the growth on that hill is a big job, Rhoades said.

“The horrible erosion problem down there is both unsightly and dangerous,” he said. “We wanted to stop the erosion and do landscaping to smooth that out.”

The project is only helping to accentuate the high school’s unique setting, he said, adding, “some of the views from that campus are really breathtaking.”

The Pelham Board of Education approved the purchase of 19 new buses and new equipment for the Pelham High School... read more