Senior-heavy Pelham looking for success on the baseball diamond 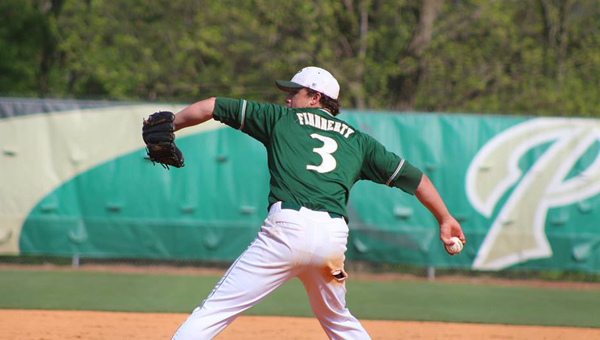 Sam Finnerty and the Pelham Panthers are poised for a stellar 2015 season. (Contributed)

PELHAM – Sean Anderson tells his kids not to worry about the rankings. The third-year head coach of the Pelham baseball Panthers doesn’t want his kids fixated on newspaper clippings or outside voices, and instead insists they focus on the moment at hand.

Ignoring the rankings is not going to be easy for this particular Pelham squad, who are currently ranked 44th in the nation by Maxpreps.com. The Panthers have 14 seniors on their 20-man roster, and a number of them will play at the college level. Sam Finnerty, Hunter Stovall, Connor Radcliff and Tyler Wilburn are all seniors who have committed to play college ball. Finnerty and Stovall have committed to take their talents to the SEC, Finnerty to Alabama and Stovall to Mississippi State, Radcliff has committed to Samford University in Birmingham, and Wilburn is committed to Jacksonville State. Cole Whitman, a junior, has committed to join Stovall at Mississippi State once he graduates in 2016.

With so much collegiate talent on the field, the expectation for this Pelham group is naturally high.

“This is definitely a unique group,” Anderson said. “In my 21 or 22 years I’ve been here it’s the most seniors we’ve ever had and it’s the deepest talent pool we’ve ever had. But that doesn’t win games. We’ve got to stay humble and do the little things right.”

Anderson knows his players are high school students, and in today’s world it’s unrealistic for them not to be aware of what is being said about their potential as individuals and as a team, but he controls what he can when they’re together.

“The kids all know (about rankings),” said Anderson. “Moms and dads keep up with the rankings and stuff like that. It’s tough to avoid. But in the locker room we don’t ever talk about that.”

The Panthers, currently 3-0 on the season, are talented yes, but Anderson believes the defining element of this team lies in the camaraderie and character of the players.

“All these kids have been playing together since they were five,” Anderson said. “It’s almost like having 14 more coaches on our team. I think they are a very high character group, they all look to each other at different times.”

As far as this season is concerned, Anderson said their expectations aren’t any different than they have been in the past.

“Every year we expect to be in the state finals,” he said. “We have to learn to play a full game, to be focused from the start. Once we can figure out how to do that, we’ll be pretty good.”