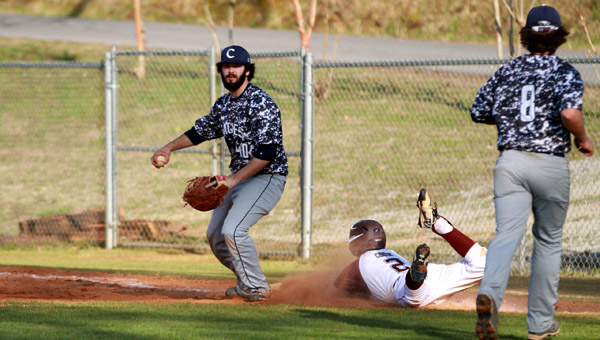 CHELSEA – The Calera baseball Eagles dug themselves a rather imposing hole to climb out of early in their Feb. 19 matchup with cross-county opponent Chelsea and could not recover, losing by a final of 16-6 to the Hornets.

Chelsea blew the doors off of the contest before Calera could even settle in, scoring seven runs in the bottom of the first inning to take a 7-0 lead after one inning. Chelsea drew a number of walks, got help from the Calera fielders, who were credited with three errors in the first, to acquire their early 7-0 lead.

Headed into the fourth inning, Chelsea had added another run to their lead before Calera attempted to mount a comeback. The Eagles scored four runs in the top of the fourth, all with two outs, to draw the lead back to a manageable margin. Tyler Ferguson, Matthew Young, Matthew Marfice and Dylan Reddin all reached base cleanly in the inning, and had the help of a pair of costly errors Chelsea errors on their way to their largest offensive output of the day.

The hope would not last long, unfortunately for Calera, as Chelsea responded in kind with four runs of their own in their half of the fourth. A pair of lead off doubles started the inning off on the right foot for the Hornets, and Calera could not catch a break as a number of more costly errors spurred Chelsea on to reclaiming their eight-run lead.

Calera would tack on two more runs in the fifth, and Chelsea would add four more to end the game early with Calera falling 6-16 on the road.

Calera used three pitchers on the day, Tyler Oclair started on the mound for the Eagles and went three and two-thirds, throwing 99 pitches and giving up six earned runs on eight hits. Kevin Dowdell and Austin McKinney were also used in relief for the Hornets on the day.

The scene at a Lacrosse Academy of Birmingham summer session. (Contributed) By BAKER ELLIS / Sports Reporter Our culture is... read more