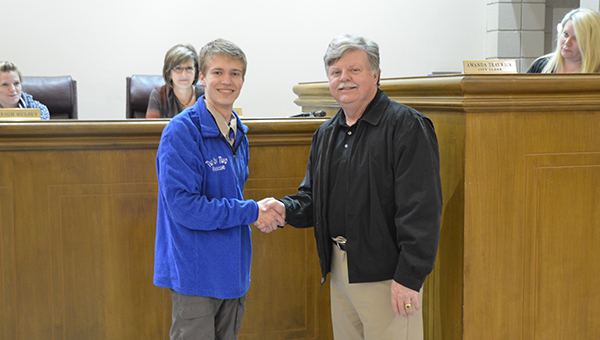 HELENA–Helena resident and Alabama School of Fine Arts student Jacob Rozycki was recognized for his Eagle Scout project with the Two by Two Animal Rescue Shelter at the Helena City Council meeting on Monday, March 2.

Rozycki was recognized by Helena Mayor Mark Hall for his roughly nine month long project at the Two by Two Animal Rescue Shelter that included a variety of projects to renovate the shelter.

Some of the renovations included replacing old fencing with new fencing where dogs had pushed down the fences and wore them down, cutting a large pen in half to make room for twice as many dogs, raising the height of a back fence that was too low, installation of a light so volunteers could see the shelters at night, adding electricity throughout the shelter, constructing new shelter so mice and other animals could not get into the dog food and Rozycki also built a covered walkway.

Rozycki had volunteered in the past at Two by Two and noted that that was part of the reason for doing the project.

“We’ve been working with them probably four or five years now volunteering and fostering and helping with fundraising,” said Rozycki. “So when we went down to the area we saw how it was before in person and we knew it needed it so that was really the motivation behind the project.”

Most of the work Rozycki did on the weekends with help from his parents Jeff and Jennifer Rozycki.

“His driver’s license was contingent on getting his Eagle Scout so that might’ve been what pushed him a little bit,” Jennifer Rozycki said with a laugh.

“Thank you again to Jacob, that’s a wonderful example you set for all of us,” said Helena councilman Hal Woodman. “Giving up your time to help with the dog shelters is great and we really appreciate your work you did there.”