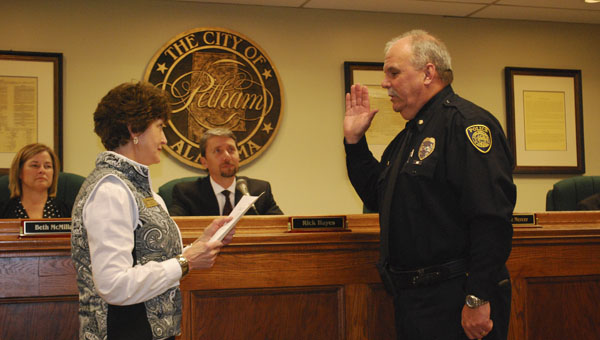 “Chief Palmer and I have spent hours speaking to the needs of the Pelham Police Department,” Pelham Mayor Gary Waters said in a written statement he read aloud during the council meeting March 2. “In the process, we have founded our relationship on honesty, candor and mutual respect. It is my opinion Chief Palmer possesses the experience, training and knowledge to fill this position. Time will tell if he possesses the leadership necessary to be successful.”

Palmer was sworn in as chief during the council meeting as numerous family members and others gathered in the council chambers applauded.

Palmer thanked Waters and the council for their “vote of confidence” in him.

“I’m going to work hard to drive this police department to excellence,” Palmer said. “That’s what our goal is. We will do that, I promise you, on this end, but I also need a commitment from the citizens. Please, buy into our program and help us on your side of the fence. Thank you, each one of you.”

“He’s been (a leader in) this organization for a long time,” Hayes said of Palmer in a March 2 phone interview. “He’s been an asset to the department and shown great leadership skills. (He is) definitely driven to implement the types of things he feels like are most important for the force, and work with other command staff and officers to build up the team to take us to the next step.”

Hayes said Palmer has been with the police department for about 27 years.

Thomas announced his retirement in early January after the Pelham Police Department launched an internal investigation prompted by the Dec. 30 release of an audio recording of eight Pelham police officers involved in a derogatory conversation regarding students with special needs at the Linda Nolen Learning Center in Pelham.

By MOLLY DAVIDSON / Staff Writer HOOVER—The Hoover City Council will be accepting applications to fill a position on the... read more