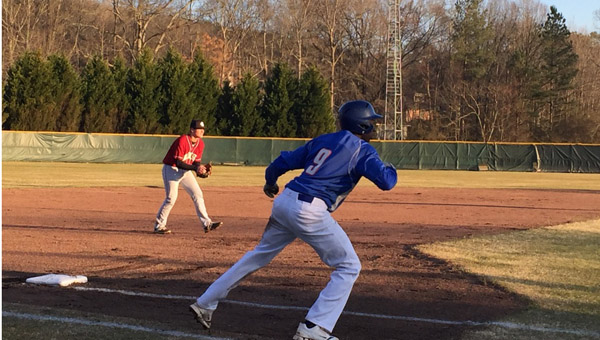 Shelby County took down visiting Montevallo on Feb. 27 by a final score of 4-3 after the Wildcats were able to stave off a Montevallo comeback attempt. (Contributed)

By NEAL EMBRY / For the Reporter

COLUMBIANA- After a late-game rally by the Montevallo Bulldogs on Feb. 27 in the sixth inning, the Shelby County Wildcats were able to send the crowd home happy with a walk-off single in the bottom of the seventh, courtesy of third basemen Tanner Carter, to win the contest by a final score of 4-3.

Carter brought home Kyle Cofer, who led off the final inning with a single. After the Wildcats moved Cofer to second, the outfielder took a risky move to get to third base. Spencer Dill grounded out to the Bulldogs shortstop, but as the fielder threw the ball to first, Cofer took off for third and slid in safely before the Montevallo defense could react, setting up Carter for the game-winning hit.

Montevallo scored in the first inning without getting a single hit. After a passed ball allowed the first batter to reach first after a strikeout, the Bulldogs came around to score following three more passed balls.

However, the Bulldogs would fail to get another run for four straight innings, as the Wildcat defense settled in. Shelby County’s offense found their stride in the bottom of the third inning, as both Dill and Jacobs knocked in runs. Dill brought another run in during the fifth inning to put the Wildcats up by two.