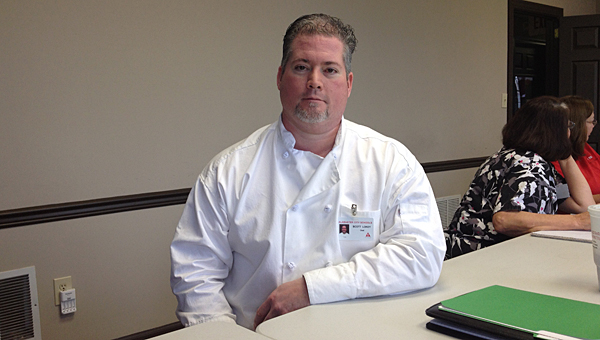 ALABASTER – Scott Lokey is no stranger to creating culinary masterpieces, but the next step in his career will provide a significantly different challenge than he is used to.

Lokey, who currently is the lead chef at a gourmet café in the Inverness Winn Dixie supermarket and previously served as the gardé manger chef at Birmingham’s Botega restaurant and café, is bringing his 26 years of cooking experience to the cafeterias of Alabaster’s schools.

“He will change from feeding 200 or 300 people to feeding busloads of kids in just a few hours per day,” said Alabaster City Schools Child Nutrition Program Director Heather McDermott.

Lokey recently began working part-time with the ACS child nutrition program to bring more flavor and nutrition to students’ meals. Because the CNP program must operate according to strict state and federal guidelines, Lokey said he is looking to make the most out of what is available to the school system’s cafeterias.

“I’m used to feeding adults, who usually want a meat, a starch and a vegetable,” Lokey said during a March 3 interview. “This will be much different.”

Lokey is used to preparing $25-$30 plates at gourmet restaurants such as Arman’s at Parklane, Prairie Fire Grill and Original Joe’s, which is a far cry from the $2-per-plate budget available to the city’s cafeterias.

“We have good meals now. We want to have great meals,” McDermott said. “We want to get away from the cafeteria mentality and think of them as cafés.”

Through the partnership, Lokey said he is planning to visit the schools’ lunchrooms “to get comfortable with the day-to-day operations” before suggesting possible changes to improve food offerings.

“We are looking to utilize fresh herbs and spices,” McDermott said, noting each school will have a student committee to provide feedback on lunches. “We want to feed our champions the best meal possible.”

Lokey is looking forward to seeing the reaction the improved meals solicit from students.

“My favorite thing is to see the face of someone tasting something you’ve created,” Lokey said.

By MOLLY DAVIDSON / Staff Writer HOOVER—The Hoover City Council will be accepting applications to fill a position on the... read more